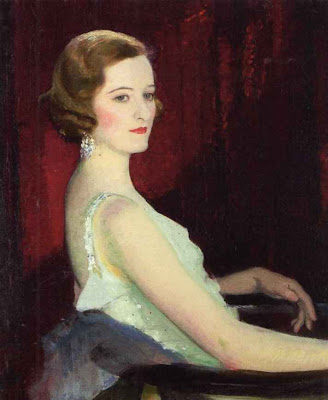 While the precise identity of the present sitter has yet to be established, the possibility exists that Miss Beaton's portrait may well represent one of Cecil Beaton's sisters, Nancy, later Lady Smiley (1909-1999), or Barbara, later Mrs Alec Hambro (1912-1973), of Milton Abbey in Dorset. The two young women rose to celebrity status as a result of their brother's success as a society photographer. Although Beaton became a household name through set and costume design for My Fair Lady (1963), he was by the end of 1920s, already overtaking rivals such as Hoppé and Horst, when celebrated images featuring his sisters were published. Although they appear in less formal family photographs in later years, both essentially ceased to act as models after their respective marriages in 1933 and 1934.

While the identification cannot, at present, be considered conclusive, it is suggested that the present portrait represents Beaton's younger sister, known as 'Baba'. In this regard, the Dorset connection may be significant although the Spencer Watsons retained their house in Holland Park after the purchase of Dunshay. If, as is likely, the identification is secure, then the present picture was probably executed just prior to Baba's marriage - making it one of the painter's final works.
http://www.christies.com/lotfinder/george-spencer-watson-ra-rws-roi-portrait/5327245/lot/lot_details.aspx?pos=4&intObjectID=5327245&sid=&page=2
at 6:00 AM

i wish i have this one in my drawing room ;)

Its so lovely isn't it.