Frank Cadogan Cowper - Our Lady of the Fruits of the Earth 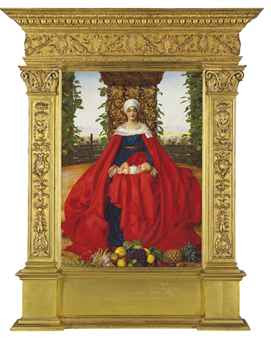 Frank Cadogan Cowper was born at Wicken in Northamptonshire, where his maternal grandfather was rector. He studied art at the St John's Wood Art School and then spent five years in the Royal Academy Schools (1897 -1902) before entering the Cotswold studio of Edwin Austin Abbey. After six months working with this American muralist, who, like his friend John Singer Sargent, had taken up residence in England, Cowper completed his artistic education by studying for a while in Italy.

Although he exhibited widely, supporting the Royal Watercolour Society and the Royal Institute of Painters in Oil Colours, as well as sending to the Paris Salon, Cowper's first loyalty remained to the RA, where he showed regularly from 1899 until his death nearly sixty years later. He became an Associate in 1907 and a full academician in 1934. Throughout his life he painted subject pictures, although as the taste for these declined in the early years of the twentieth century he turned increasingly to portraits, specialising in glamorous and slightly fey likenesses of young women.

Cowper's early work is strongly influenced by the Pre-Raphaelites, but by about 1906 he was adopting a more Renaissance idiom, often with an emphasis on rich brocades to create a decorative effect. His RA diploma picture, Vanity, exhibited in 1907, is particularly significant since it borrows motifs from Giulio Romano's portrait of Isabella d'Este at Hampton Court, a picture which had inspired the young Burne-Jones half a century earlier. In 1908-10 he contributed to the murals illustrating Tudor history which a group of artists, supervised by his former master, Abbey, painted for the Commons' East Corridor in the Houses of Parliament.

Cowper spent the early part of his life in London, occupying studios in St John's Wood, Kensington and Chelsea. Our Lady of the Fruits of the Earth was painted at 2 Edwardes Square Studios, a southerly outpost of the artists' colony in Holland Park that had sprung up in the later nineteenth century under the leadership of the President of the Royal Academy, Sir Frederic Leighton.

At the end of the Second World War, Cowper moved to Gloucestershire, settling at Fairford, not far from where he had served his apprenticeship with Abbey. He is often seen as the last exponent of the Pre-Raphaelite tradition. As such, he was patronised by Evelyn Waugh, a pioneer of the Victorian revival, and included in The Last Romantics, the 1989 exhibition at the Barbican Art Gallery that celebrated the survival of Pre-Raphaelite values into the age of Modernism. In fact he was responsible for one of the most astonishing examples in the show, The Three Queens find Lancelot sleeping, exhibited at the RA as late as 1954.

Our Lady of the Fruits of the Earth had appeared at the RA in 1917, when the artist was forty. It was one of four pictures he submitted that year, the others being portraits. The First World War still had a year to run, and the picture may make oblique reference to the crisis. The themes of motherhood, fecundity and regeneration, not to mention the mood of calm serenity, all seem to hold promise of the renewal that will, hopefully, come with the return of peace.

At the same time the picture must have struck an incongruous note among the many RA exhibits referring directly to the war in a more realistic idiom. The following year Cowper was to move even further away from current events in The Blue Bird, his chief RA exhibit of 1918. Sold in these Rooms on 15 June 2011, the picture seems to be frankly escapist, illustrating a fairytale by Madame d'Aulnoy.

The two pictures have significant points in common. The model seems to be the same, and in each case she wears a white coif and sits before a brocaded hanging. This is set immediately behind her in The Blue Bird, precluding any hint of distance, but in Our Lady is pushed back, allowing vistas to open up on either side.

Like so many of Cadogan Cowper's pictures, Our Lady is full of references to art history. Perhaps the most obvious is the canopied hanging, clearly imitating the so-called 'cloths of honour' that so often hang behind the Virgin and Child in Renaissance paintings. Cowper's letters suggest that he was particularly aware of Flemish prototypes for this motif, and he may well have seen the exhibition of Flemish art held at the Guildhall Art Gallery in London in May 1906, which contained relevant works by Jan Van Eyck, Hans Memling, and others. Meanwhile numerous Italian examples were available to him in the National Gallery. In fact there were nearly twenty by 1917. Some of the most notable, such as Bellini's Virgin and Child and Mantegna's Virgin and Child with SS Mary Magdalene and John the Baptist, had been in the collection since they were acquired by Sir Charles Eastlake in 1855.

There are also quotations from the early Pre-Raphaelite paintings that Cowper admired. The sheeps' heads looking over the wattle fence have clearly been 'lifted' from those in Millais's masterpiece The Carpenter's Shop. The foliage that frames the patches of sky seems a deliberate echo of the vine in Rossetti's Girlhood of the Virgin; and the form of the baby, together with the way he is 'presented' rather than being embraced or fondled, recalls the new-born child in Madox Brown's unsettling picture Take your Son, Sir. It is true that none of these works had yet entered the Tate Gallery, where they all hang today, but a dedicated Pre-Raphaelite follower such as Cowper would undoubtedly have seen either the originals or reproductions. After all, Burne Jones's Sidonia von Bork was not in the Tate when he painted the picture that so obviously pays it homage, Vanity.

Our Lady of the Fruits of the Earth was not Cowper's first attempt at this type of composition. A simpler version in watercolour, entitled The Morning of the Nativity (private collection), had been exhibited at the Royal Watercolour Society in 1908. It was included in The Last Romantics (no. 160), and is illustrated in the exhibition catalogue. Other variants, whether paintings or preliminary studies, are either known or recorded.

By 1917 art critics were no longer writing the long reviews of Royal Academy exhibitions that had been the norm in the Victorian heyday, and the sort of archaising picture that Cowper was painting tended to be dismissed in a sentence or two if mentioned at all. But Our Lady of the Fruits of the Earth did receive attention in at least one review, that in the Times. The writer described it as a 'ritual picture', and compared it with others by John Lavery and Robert Anning Bell that, in his view, belonged to the same genre. He felt that both the Cadogan Cowper and the Lavery, called The Madonna of the Lakes, were essentially tableaux vivants; but whereas in the Lavery 'the mixture of ritual and realism' was 'utterly unreal', Cowper's less realistic approach made for a more homogeneous effect. Even here, however, there was some discrepancy between the lifelike fruits, which would 'make by themselves a very good dessert piece', and the 'less real' figures, who 'seem a mere pretext for [the fruits'] display'.

The frame is original, but was almost certainly not made for the picture. Cowper was in the habit of buying picturesque old frames and painting pictures to fit them.

Merry Christmas and thanks for this blog!!

Thank you and to you - this is just wonderful isn't it.