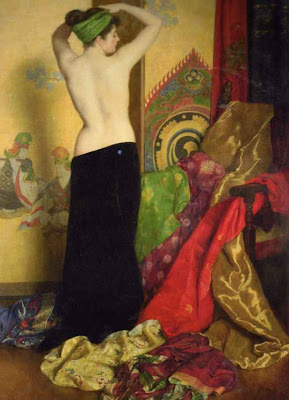 Collier's sumptuous depiction of grande luxe and sensuality marks a high-point in his varied oeuvre. Both Millais and Alma-Tadema took an interest in his early career, while his formal education was undertaken at the Slade, under Sir Edward Poynter, and in Paris under J.P. Laurens. He exhibited over 140 works at the Royal Academy; this picture appeared there in 1917. It prefigures the liberation found after the
First World War, and is in marked contrast to The Sleeping Beauty, sold in these Rooms, 5 June 2008, lot 53, which can be considered one of the final manifestions of Pre-Raphaelitism.
http://www.christies.com/lotfinder/the-hon-john-collier-pomps-and-vanities/5327240/lot/lot_details.aspx?pos=1&intObjectID=5327240&sid=&page=2
at 6:00 AM