Charles Edward Perugini - The Ramparts, Walmer Castle; Portraits of the Countess Granville, and the Ladies Victoria and Mary Leveson-Gower 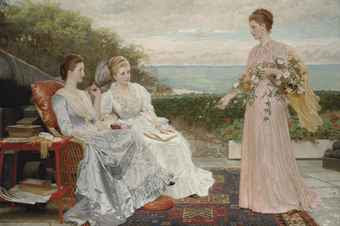 Commissioned by the second Earl Granville, and thence by descent

Exhibited at the Royal Academy in 1891, this attractive triple portrait shows the second wife and two daughters of one of the great Whig magnates of the Victorian age. Granville George Leveson-Gower, second Earl Granville (1815-1891), entered Parliament in 1837, moving to the Lords, where he headed the Liberal party for many years, on his father's death in 1846. During a long political career serving four prime ministers - Palmerston, Lord John Russell, Lord Aberdeen and Gladstone, he held numerous high offices of state and was associated with some of the most important events and significant issues of the day. As colonial and foreign secretary, posts he held for long periods between 1868 and 1886, he was beset by imperialist crises in India and South Africa, Canada and New Zealand. He also had to cope with the Franco-Prussian War and the ambitions of Bismarck, the aftermath of the great Eastern Question of the 1870s, and the occupation of Egypt that ended so tragically with the death of Gordon at Khartoum in January 1885. His urbane, cosmopolitan outlook was an undoubted asset to his party, while his London house in Carlton House Terrace gave it a social centre in much the same way that Holland House, Kensington, had done earlier in the century.

Lord Granville's first wife died without issue in 1860. On 26 September 1865, he married Castalia Rosalind (1847-1938), youngest daughter of Walter Frederick Campbell of Islay, Scotland, and a full thirty-two years younger than her husband. It is she who appears on the left in the picture, now forty-four and looking remarkably youthful for her age. Their marriage was to be blessed with five children: Victoria and Sophia, who always seems to have been known as Mary, are the two girls depicted here. Victoria is seated beside her mother, holding a fan behind her head and an open book, from which she has perhaps been reading aloud, on her lap. Her younger sister approaches with a spray of dog-roses. Victoria was now twenty-four and would remain a spinster for some time, marrying Harold John Hastings Russell, a barrister, in 1896. Sophia married Hugh Morrison of Fonthill House, Tisbury, in Wiltshire. For many years he was prominent in local affairs, serving as High Sheriff of the county, a J.P., and Tory member of Parliament for the Salisbury division from 1918. Both sisters produced children, and both outlived their spouses.

The ladies are seen on the Kent coast, looking out over the English Channel. Lord John Russell had made Earl Granville Lord Warden of the Ports in 1865, thus enabling his family to use Walmer Castle as a country retreat. Servants have brought out a wicker sofa, furnished with cushions, together with a side-table, books and newspapers, a footstool for Lady Granville and even a carpet, but to the left looms a large cannon as a reminder of the Castle's original purpose. The juxtaposition of this potent symbol of aggression, cast in uncompromising bronze, and the display of femininity represented by the three aristocratic women, fashionably dressed and indulged with every luxury, does much to give the picture its piquancy and edge.

The artist Charles Edward Perugini was aged 52 at the time of the picture's exhibition in 1891 and was at the height of his career, this the picture being one of his most ambitious. He had lavished his utmost skill on depicting the dresses, particularly Lady Granville's grey silk gown, and had devised an enchanting colour scheme in which pearly, iridescent tones are set off by bold touches of lacquer-like red, distributed across the canvas from the table in the left foreground to the geraniums in the right middle-distance. In the past Perugini's speciality had been idealised genre subjects, but these were beginning to go out of fashion and it is hard to resist a suspicion that with The Ramparts, Walmer Castle he was making a bid for greater recognition as a painter of society portraits.

Perugini had been born in Naples, the son of a singing-master, but had grown up in England since the age of eight. By 1853 he was in Rome, where he met the young Frederic Leighton, the future president of the Royal Academy and undisputed head of the late Victorian art establishment. Perugini became one of Leighton's many protégés, continuing to receive his financial support well into the late 1870s possibly as payment for studio assistance. Certainly Perugini's style as an artist was greatly influenced by Leighton's, and he explored a similar range of subject-matter, operating, as it were, on the borders between modern life and an idealism in the classical-cum-Aesthetic taste. His Girl Reading, shown at the R.A. in 1878, is a perfect example. Like Leighton, moreover, he was loyal first and foremost to the Academy, where he showed almost every year from 1863 to 1915.

In 1874 Perugini married Kate Collins, the younger daughter of Charles Dickens and widow of the Pre-Raphaelite painter Charles Allston Collins. (She was hence the sister-in-law of another novelist, Wilkie Collins). She herself was a talented artist, although she is probably best known to posterity as the model for the distraught young woman in Millais' popular painting The Black Brunswicker of 1860. Perugini too was intimate with the great ex-Pre-Raphaelite.

Perugini's portrait of the Granvilles vividly reflects these artistic allegiances. Its high degree of finish and polished surfaces are eminently Leightonesque, while the subject evokes comparison with Millais' Hearts are Trumps, his portrait of the three Armstrong sisters shown at the Royal Academy in 1872, which in turn owes a debt to Reynolds's Ladies Waldegrave. Similarly, if a little more subtly, Perugini's portrait seems to echo Three Ladies adorning a Term of Hymen, Sir Joshua's portrait of the three Montgomery sisters that had been in the National Gallery in London since 1837. The mingling of standing and seated figures in Perugini's design, their conversational interaction, and the part played by flowers (the bouquet in the Countess's lap, the garlands held by Sophia) in linking them together, all suggest that the artist had found inspiration in this monumental work.

Only a few portraits Royal Academy were noticed by the critics. F.G. Stephens, the veteran critic on the Athenaeum thought the picture 'pretty and excessively polished, somewhat flat and hard, yet bright, studious, and pure. The ladies are marvellously attired, and beautiful according to the standard of the Book of Beauty'. Stephens felt it was 'Mr Perugini's best work', exhibited to date. The masterpiece to which the artist had so clearly aspired had been achieved.

We are grateful to Lucinda Hawksley for her assistance in preparing this catalogue entry.
http://www.christies.com/lotfinder/charles-edward-perugini-the-ramparts-walmer-castle/5521069/lot/lot_details.aspx?from=salesummary&pos=7&intObjectID=5521069&sid=9954c15e-eda4-4842-adcb-7417973762cc&page=2
at 1:00 PM