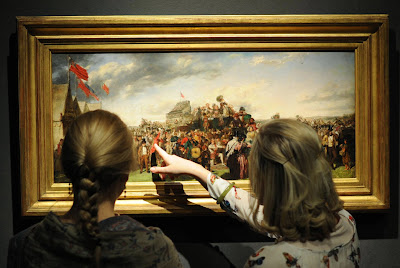 "The Derby Day" is an early version of one of the era's most famous pictures — Frith's teeming, picaresque image of the crowds at an 1850s horse race, from a rich family in their carriage to gamblers, acrobats and prostitutes.

The finished painting hangs in the Tate Britain gallery in London. The 15-by-35 inch (39 centimeter by 91 centimeter) oil-on-canvas sketch sold by Christie's is Frith's first complete version of the scene.

Christie's said the sale — to an anonymous bidder over the phone — set a world record price for Frith at auction.

The piece had been hanging in a modest New England beach house for decades before a friend of the owner suggested it might be worth something.

Peter Brown, Christie's director of Victorian pictures, had said before the sale that the vendor, who is in his 60s and wished to remain anonymous, believes his parents bought the painting some time before World War II, when Victorian art was often dismissed as garish and sentimental.

Since the 1970s, critical opinion has changed, and works by the best Victorian artists are coveted by collectors.

Frith, one of the era's most successful painters, specialized in busy scenes of daily life, and his subjects ranged from beachgoers to railway stations to royal weddings.

"The Derby Day" was so popular when first exhibited in 1858 that a special rail was installed at the Royal Academy in London to hold back the crowds.
http://www.artdaily.org/index.asp?int_sec=2&int_new=52480
at 1:00 PM