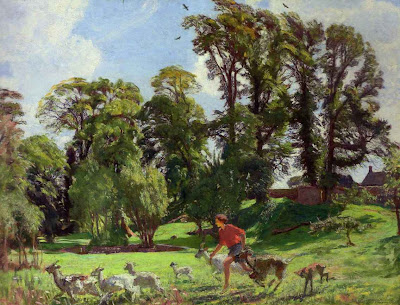 Between the 1880s and the Great War, the era of James McNeill Whistler and John Singer Sargent, portraiture became the most radical genre in British painting. Critical and theoretical writing on the subject burgeoned and mythologies surrounding the act of painting a portrait were explored in novels such as Oscar Wilde's Picture of Dorian Gray (1891) and George Gissing's Will Warburton (1905). The Royal Society of Portrait Painters, of which George Spencer Watson was a member, was formed in 1891, during his student years at the Royal Academy Schools. Whistler and his followers elevated Velázquez to the role of magus, at this time, flocking to Madrid to execute copies of the great full-lengths of Philip IV and the members of his court, while Sargent's pyrotechnics were famously compared to those of Van Dyck by none other than the Prince of Wales.

If 17th and 18th Century 'swagger' portraiture presented a range of fashionable prototypes, so too did the earlier Italian schools - the focus of growing competition among amateurs since the mid-century. Renaissance scholarship from Ruskin, Pater and Symonds was the subject of constant revision as collectors awaited with trepidation the arrival of Bernard Berenson on their doorsteps. The Florentine and Umbrian masters insisted more upon drawing and design than the courtier-artists of later centuries and in Bronzino and Pontormo, young Edwardians such as Spencer Watson found an alternative tradition equal to that of the Spanish Caravaggesque painters who appealed to Whistlerians such as Lavery, Furse, Shannon and Steer.

In the summer of 1913, two months after the birth of their daughter, Mary, the Spencer Watsons rented a cottage at Studland, on the Isle of Purbeck, beginning an association with the area which was to last for the remainder of the painter's life. Numerous oil sketches were painted of the beach, the sand-dunes and the coastal landscape. The area became a kind of Eden; it so fascinated the painter that in 1922, he and Hilda purchased Dunshay Manor on the Isle. This ancient house was partially modernized and was, on the deaths of her parents, inherited by Mary Spencer Watson who, by that stage had gained a reputation as a sculptor.

During her childhood years, Mary frequently posed for her father - most notably as The Saddler's Daughter (sold Christie's, London, 16 December 2009, lot 24), shown at the Royal Academy in 1924, but painted around the time of the move to Dunshay. She features prominently in grand manner group portraits such as Four Loves I Found, 1922 and Us Riding, 1926. This latter picture shows the artist, his wife and daughter riding past the ornamental gate leading to the manor house.

These carefully planned compositions build up Watson's stylisations to a monumental degree. In Drat them Goats! however, his work returns to a more naturalistic vein related to vivid oil sketches, in its depiction of the thirteen year old Mary running with the goats in the gardens at Dunshay.

In this instance the oil sketch was painted after the Royal Academy piece (1927, no. 22), since one of the trees has been removed and the others reduced. While classical inferences associated with the bucolic goatherd have been studiously avoided, the work recalls the bright impressionistic colouring of contemporaries such as Harold Speed, Philip Connard and Wilfrid de Glehn. Two further oils representing the scene in spring and early autumn, entitled Dunshay from the lower lawn and The Glade, represent a girl and dog without goats in one case and goats grazing without the running figure in the other (see Christie's, South Kensington, 30 June 2010).
http://www.christies.com/lotfinder/george-spencer-watson-ra-rws-roi-mary/5327242/lot/lot_details.aspx?pos=3&intObjectID=5327242&sid=&page=2
at 1:00 PM