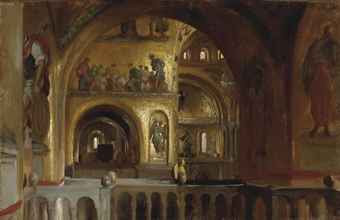 Leighton was raised in various European cities by parents who preferred to reside on the Continent than live in England. Although the family had sampled Rome and Florence, the artist's first prolonged stay in Venice came in 1864, after he had established himself in London. The architectural complexity of the Basilica of St Mark's, recently described by Ruskin as 'the most beautiful building in the world', impressed him greatly. Leighton relished describing the fall of light and shade on its jewel like surfaces and developed his pre-occupation with depicting the receding arch (later explored in his studies of Moorish buildings in Granada and Algiers). The sketch, and another study, was used for an uncompleted painting entitled The Mosaicists, (untraced) and Widow's Prayer, the artist's Royal Academy exhibit of 1865 (Cecil French Bequest, London, Borough of Hammersmith and Fulham; on loan to Leighton House, Kensington). An early owner was the distinguished architect, Alfred Waterhouse, R.A.
http://www.christies.com/lotfinder/frederic-lord-leighton-prabistrongemfont-the/5521055/lot/lot_details.aspx?from=salesummary&intObjectID=5521055&sid=9954c15e-eda4-4842-adcb-7417973762cc
at 6:00 AM