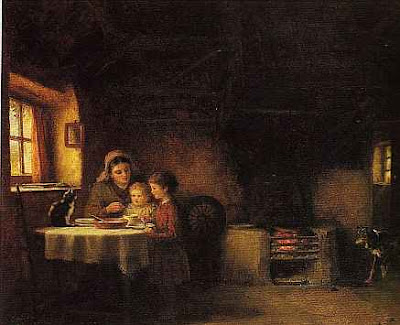 genre painter, was born on 13 February 1827 at Windsor, the son of George Hardy, a musician in the private band of music in the royal household at Windsor. He studied at the Royal Academy of Music in Hanover Square, London, but in 1846 devoted himself to painting under the influence of his elder brother George Hardy (1822–1909), also a painter of domestic subjects, and the painter Thomas Webster, a family friend and also the son of a royal musician.

Hardy's work strongly depended in style and subject on the early work of Webster, and on other contemporary imitators of Dutch and Flemish seventeenth-century genre painting. His earliest paintings, of the 1850s and 1860s, are small, highly finished cottage interiors with figures, combining careful detail with delicacy of tonality, lighting, and subject. They accurately depict the vernacular architecture, costume, and lives of the villagers of Buckinghamshire and Kent. From the late 1860s the social class of his subjects rose, the anecdotal content of his pictures dominated, and his handling of paint coarsened.

Hardy's work rapidly achieved critical and commercial success. In 1865 The Leaky Roof was described as ‘pre-eminent for knowledge, character and objective truth’ (Art Journal, 1865, 170); The Sweep (1862; replica at Wolverhampton Art Gallery) sold for £200 in 1862 and resold for £640 in 1874, at the height of his career. He exhibited ninety-three pictures at the Royal Academy between 1851 and 1898, and five at the British Institution between 1851 and 1856. His work is well represented in British public collections, most notably by the nineteen paintings at the Wolverhampton Art Gallery, including The Clergyman's Visit and Preparing for Dinner, both c.1852; The Dismayed Artist, 1866; The Chimney Sweep, 1866; Baby's Birthday, 1867; and Sorrowful News, 1872. Among his other better works are The Volunteers (1860; York); The Young Photographers (1862; Tunbridge Wells); Children Playing at Doctors (1863; V&A); and The Wedding Breakfast (1871; Atkinson Art Gallery, Southport).

Hardy lived in Windsor until 1852 when he married, on 11 March, Rebecca Sophia Dorrofield (c.1828–1906), the daughter of a farmer from Chorley Wood. They had five sons and a daughter. After a few years at Snell's Wood, near Amersham, Buckinghamshire, Hardy settled in Cranbrook, Kent, in 1854. A group of artists and friends soon gathered around him: Hardy's brother George, Thomas Webster, John Calcott Horsley, George Bernard O'Neill (1828–1917), and briefly Augustus Edwin Mulready. However, the ‘Cranbrook colony’ was held together more by ties of family and friendship than by artistic kinship. Hardy lived at 2 Waterloo Place, Cranbrook, from 1854 until about 1875, and had a studio in Thomas Webster's house in High Street, Cranbrook, until at least 1894. He also kept a house in Brunswick Gardens, Kensington, London, from about 1875 to 1890. He died at 1 Waterloo Place, Cranbrook, on 1 April 1911 and was buried at St Dunstan's Church, Cranbrook. His daughter (Amelia) Gertrude (1865–1952), the sole beneficiary of his will, continued to live and paint in Cranbrook until the 1930s.