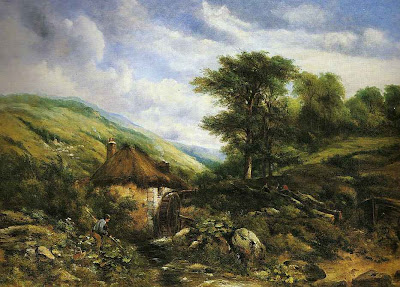 [An Overshot Mill in a Wooded Valley] 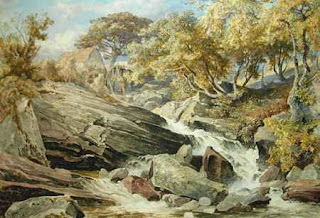 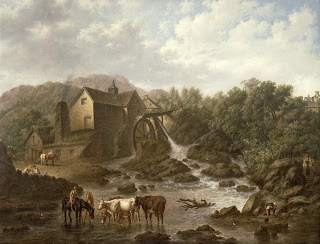 Water mills are of three kinds viz breast mills undershot mills and overshot mills In the former the water falls down upon the wheel at right angles to the float boards or buckets placed all round to receive it if float boards are used it acts only by its impulse but if buckets it acts also by the weight of water in the buckets in the under quarter of the wheel which is considerable In the undershot wheel float boards only are used and the wheel is turned merely by the force of the current running under it and striking upon the boards In the over shot wheel the water is poured over the top and thus acts principally by its weight as the fall upon the upper part of the wheel cannot DO very considerable lest it should dash the water out of the buckets Hence it is evident that an undershot mill must require a much larger supply of water than any other the breast mill the next unless the fall is very great and an over shot mill the least.

Landscape painter, has often been mistakenly called (Frederick) William Watts. According to his second wife, Julia Watts, he was born in Bath, Somerset, on 7 October 1800, his father had been in the navy, and his mother was Mary Eyre, daughter of Ambrose Eyre, rector of Leverington, Isle of Ely, Cambridgeshire; he may also be the Frederic Waters Watts, son of William and Mary Watts, who was baptized on 9 July 1801 at St Albans Abbey, St Albans, Hertfordshire. Watts was probably the William Watts who entered the Royal Academy Schools in London in 1817, aged seventeen, and won its silver medals in 1819, 1820, and 1821. He was certainly the Frederick W. Watts who exhibited at the Royal Academy from 1821 to 1860, the British Institution from 1823 to 1862, and elsewhere.

Watts lived all his working life in the Hampstead area of London but painted landscapes throughout much of Britain; he appears also to have visited France in 1826. (Two pictures with Rouen as subject matter were shown at the British Institution in 1827.) His exhibited pictures of the 1820s and 1830s usually bore specific topographic titles and were closely handled; later canvases were more broadly painted and often imitated the mature work of John Constable. Many carried generalized titles such as River Scene with Barges, enabling others subsequently to identify them as scenes in ‘Constable country’ and to misattribute them to Constable himself. Watts was regarded as a follower of Constable even in his earlier work: in 1833 one critic saw him as ‘trying to outrun the Constable’ but concluded that: ‘He never will, … daub away as he may’ (Ivy). That same year, however, Constable suffered the indignity of being mistaken for his follower: one of his paintings of Helmingham Dell in Suffolk was put up for sale at Christies but arrived too late for inclusion in the catalogue. It was bought in at 50s. because, Constable told a friend, ‘it was considered Watt's, and at least not certain, if mine’ (Beckett, 164). Like Constable, Watts was a prolific outdoor oil sketcher. (Two examples are in the Tate collection.) Although possessing their own distinctive character, such sketches have also been misattributed to Constable in the past.

No details of Watts's first marriage are known except that two sons and three daughters were born of it, and that one, Alice J. Watts, became a painter. Most details of his second marriage also remain to be discovered. According to the second Mrs Watts, Julia Joanna Louisa, her husband ‘had an humble opinion of his works & talents’ and ‘ceased to paint for 10 years before his death’ (J. Watts to E. E. Leggatt, 13 Feb 1911). Watts died at his home, 11 Lawn Road, Hampstead, London, on 4 July 1870 of lung disease compounded by diabetes.