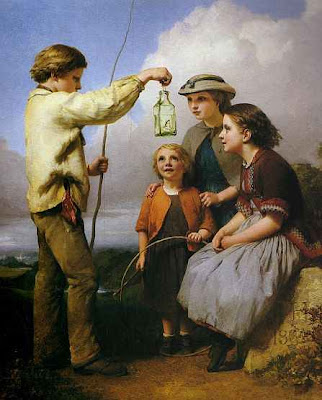 A history and genre painter, was born in London on 12 December 1819, the son of Anthony Le Jeune, a professional musician of Flemish origin. Le Jeune hailed from a musical family, his grandfather and brothers also being musicians. His sister developed an interest in photography, working in Italy. At a young age, Le Jeune expressed a desire to be an artist, and his family encouraged him to study the collections in the British Museum. In 1834 he was admitted to the Royal Academy Schools; there, after obtaining four silver medals in succession, he exhibited his first work in 1840, Joseph Interpreting the Dream of Pharaoh's Chief Butler. In 1841 he earned the gold medal for his Samson Bursting his Bonds, exhibited at the British Institution in 1842. He married Dorothy Lewis Lewis (fl. 1820–1900), daughter of James Dalton Lewis, a lieutenant in the Royal Navy, on 21 June 1844, and together they had five sons and three daughters.

Le Jeune worked in both oil and watercolour. He exhibited eighty-four pictures at the Royal Academy between 1840 and 1894, and twenty-one at the British Institution between 1842 and 1863. Early in his career Le Jeune painted biblical themes, such as the Liberation of the Slaves (1847), purchased by Prince Albert and now in the Royal Collection at Osborne House, as well as literary themes often drawn from Shakespeare (Prospero and Miranda, 1844) or Spenser (Una and the Lion, 1842). In the 1850s, however, he began to devote himself to genre scenes, especially depictions of children, and it is for these works that Le Jeune gained his greatest measure of fame. In 1858 the Art Journal commented that, ‘whatever merits his other pictures possess, his real strength lies in his representations of those “small folk”’ (p. 267). Subjects such as Early Sorrow from 1869 (Royal Holloway College) and Children with Toy Boat (Manchester City Galleries) from 1865 characterize these works, which were praised for their ‘truth, beauty, and natural expression’ (ibid.).

While Le Jeune continued to exhibit works at the Royal Academy and the Society (later Royal Society) of British Artists, he was appointed headmaster of the morning class at the Government School of Design at Somerset House. He held this post until 1848, when he was appointed curator of the painting school of the Royal Academy, an office that allowed him to teach painting. Le Jeune held this post until 1863. That year he was elected an associate of the Royal Academy, and although he never achieved the rank of academician, in 1886 he was named an honorary retired associate.

Le Jeune remained in London his entire life, retiring to Hampstead about 1864. He died at his home, 155 Goldhurst Terrace, Hampstead, on 5 October 1904, and was buried at Kensal Green cemetery.

An EFT is a Newt 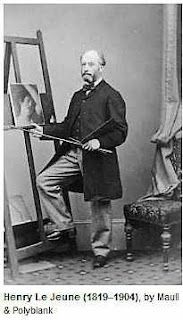 I have gone through some of the plates of the paintings you have displayed here. I loved to see the same. I would keep visiting here.

If you are interested in seeing miniatures of Mughal and Rajasthan miniature paintings, then do visit my blogsite.

Thank you, good blog, I will look in regularly.