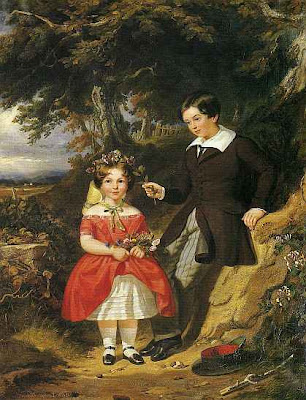 [Portrait of George and Ann Harvey] 1846

George grew up to be the Vicar of Navenby in Lincolnshire.

Landscape painter, was born in Lanton Street, Penrith, Cumberland, on 28 August 1806, the eldest son of Merrick Thompson (d. 1833), a manufacturer of linen check and a well-known member of the Society of Friends and his wife Mary (d. 1837), daughter of Thomas Roper of Penrith. Thompson attended the free grammar school there and drew from an early age, but grew up in relative poverty after the ruin of his father's business during the trade depression of 1812. His aspirations to become an artist met with little sympathy from his family, and he was apprenticed first to a grocer and then to a house-painter. However, he devoted all his leisure time to his favourite pursuit.

While sketching a bridge crossing the River Lowther one autumn day, Thompson met William Lowther, second earl of Lonsdale, who stopped to comment on his work. The earl invited him to Lowther Castle to sketch and copy as he pleased, and he later sent one of Thompson's paintings to Sir Thomas Lawrence. As a result Thompson was summoned to London in 1829 and admitted as a student at the British Museum and later the Royal Academy Schools. At Lonsdale's instigation he studied at the academy under Robert Smirke. After some time Smirke advised him to ‘go to nature’ for his studies, arguing that if he stayed at the academy ‘all originality of thought and invention would be lost’ in him (Jewitt, 15).

Thompson first exhibited in 1824, at the first exhibition of the Society of British Artists, sending a View in Cumberland, but he did not exhibit at the Royal Academy until 1832, in which year appeared The Druids Cutting Down the Mistletoe. This was followed in 1833 by a picture containing full-length portraits of the daughters of the Hon. Colonel Lowther. On 14 August 1834 he married, at St Saviour's in Southwark, Ann Parker Bidder (d. 1844), sister of George Parker Bidder, the celebrated engineer; they had one son. She was herself ‘a clever painter in water colours’ (Jewitt, 23) and they lived briefly at Luton before moving to Hitchin, in Hertfordshire. Thompson's next exhibit was Harvest Home in the Fourteenth Century, which appeared at the British Institution in 1837, and was presented by the artist to his patron, the earl of Lonsdale.

Ten years elapsed before Thompson next exhibited, during which time he took commissions to paint the mansions of landed proprietors. Having access also to their collections, he spent time copying. In 1841 he settled with his family in a house belonging to his patron in Lowther New Town, Westmorland. There, in January 1844, Ann Parker Thompson died, and the following year Thompson moved into The Hermitage at Hackthorpe, a cottage given to him as a permanent residence by Lord Lonsdale. On 14 March 1850 he married Elizabeth, daughter of Jonathan Varty of Stagstones, near Penrith, a woman ‘strongly imbued with artistic feeling’ who painted with ‘more than average merit’ (Jewitt); there were no children.

In 1847 Thompson sent to the Westminster Hall competition The Highland Ferry-Boat, which was engraved by James Tibbits Willmore and which proved a success, selling several thousand copies. The Proposal appeared at the Royal Academy in 1848; his annual academy exhibits included The Highland Bride, likewise engraved by Willmore, in 1851, another success on a large scale, though its composition was later criticized in the Art Journal; The Course of True Love Never did Run Smooth, in 1854; and Looking out for the Homeward Bound, in 1856. He painted in 1858 Crossing a Highland Loch, which was engraved by Charles Mottram; but he did not exhibit again until 1860, when he sent to the Royal Academy The Signal, which was engraved by Charles Cousen for the Art Journal of 1862. In 1864 he had at the academy The Height of Ambition, which was also engraved by Cousen for the Art Journal. Among his best works are Rush Bearing and a view of Rydal Mount.

In his later years Thompson devoted himself chiefly to landscape subjects with figures, the themes of which were for the most part drawn from the mountains and lakes of Cumberland and Westmorland, but occasionally from Scotland. His range, however, was limited, and his work was lacking in poetic sympathy. His attempts at classical and scriptural subjects, such as Acis and Galatea, exhibited at the Royal Academy in 1849, and Proserpine, were not a success. Thompson also painted two altarpieces for the church of St Andrew's, Penrith, and a number of hunting scenes.

Thompson died at his home, The Hermitage, on 27 December 1879, and was buried in Lowther churchyard on 31 December.