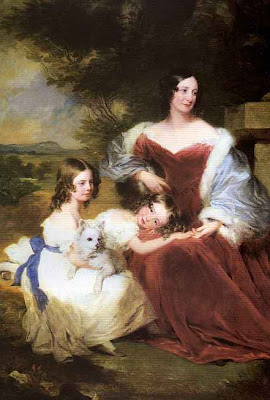 [Portrait of Mrs Sarah Frances Cooper and her daughters, Selina standing to the left, and Cicely Florence, with her head on her mother's lap, and their dog, in the grounds of Markree Castle, Co. Sligo]

Frederick Richard Say was a highly successful portrait painter and the son of mezzotint engraver William Say. Among his sitters were George IV, Prince Albert, the archbishop of York and Earl Grey. Say's portrait of Edward Bulwer-Lytton is considered to be his best work. His works were engraved by Samuel Cousins, James Thomson, G.R. Ward and William Walker. Say exhibited at the Royal Academy and the British Institution from 1826 to 1854.