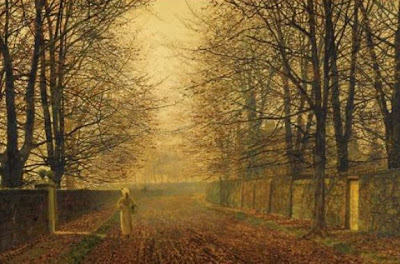 Throughout the 1880s John Atkinson Grimshaw painted a series of views of suburban streets in autumn, predominantly painted in Yorkshire. In these images of roads and lanes between the high stone walls hiding mansions and villas from prying eyes, the scenes are deserted except for a solitary female figure making her way down a leaf and puddle strewn road. These paintings are perhaps the most evocative and typical of the artist, who was unrivalled in his depiction of the evening gloaming. The busy traffic of horses and carts bringing goods into the city from the outlying farms have left their impressions in the damp soil of the road, but most have long since
departed and the gateways have been closed to the outside world. There is an emotive sense of stillness and calm which pervades these golden images of evening light. Grimshaw was arguably the most evocative painter of moonlit and evening scenes in which calmness and silence pervades these moody images. The subject is not a
specific locality, but the effects of light upon a generic suburban street. Unlike the pictures of the great cities of Britain and the fishing villages that Grimshaw painted, there are no landmarks in Golden Gleam to place the exact location and the picture is therefore a more abstract summary of glorious light and autumnal splendour. The sense of mystery evoked by the appearance of the lonely road is further enhanced by the anonymity of the scene with the exact location withheld. The Victorians had a huge appetite for such romantic intrigue and it was a prevalent theme in the novels, plays and poetry of the age. Grimshaw himself was inspired by the writings of Wordsworth, Browning, Shelley and in particular Tennyson. Alexander Robertson sums up thus; 'A few lines from Tennyson's 'Enoch Arden' seem to demonstrate this most succinctly:

oohhhh I love it when there is a connection between the artists of the Victorian period and the writers, especially Tennyson. Wouldn't it be great if Grimshaw met his literary hero. I am thinking of The Lady of Shalott in particular.

I wish I could have met him - I like a bit of Tennyson.