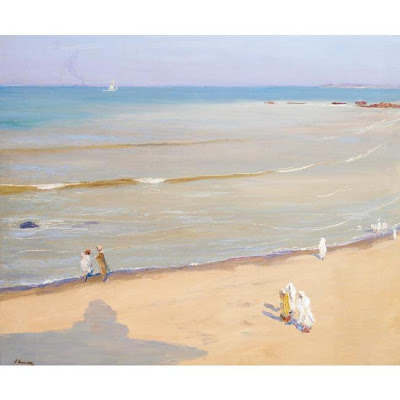 ‘..the chief note of Tangier is its whiteness. White houses, sands like snow and above all, a dazzling white atmosphere..’
(R.B.Cunninghame Graham as quoted in Kenneth McConkey, Sir John Lavery, 1993, p. 83)

Lavery first visited Tangier in 1891 almost certainly upon the recommendation of his fellow Glasgow Boys, Arthur Melville and Joseph Crawhall who had found great inspiration in the souks and bazaars of the exotic white-washed city. Almost as soon as he had unpacked his bags, Lavery began to busy himself painting small views of the sights he could see from the terrace on the rooftop of the Hotel Continental which looked one way into the bustling enigmatic city and the other way across the bay towards Andalucia and the Rock of Gibraltar. It has been said that Lavery's eye was enlivened by the regular supply of inspiring sights and colours in Tangier. The pictures he painted there certainly have a wonderful spontaneity and glimmer with refracted light. From 1891 onwards until the outbreak of World War I, Lavery returned to Tangier and by the beginning of the twentieth century, had acquired a house there, named Dar El Midfah or ‘House of the Cannon’ after a half buried cannon in the garden.

Nineteenth century artists and tourists had been drawn to Tangier to experience the exotic Arab way of life and initially Lavery had sought to paint the rather stereotyped view of the ancient city as painted by the likes of Ingres, Gerome and Constant. He soon found that the reality was far more interesting and by painting the people and sights as he found them, his appreciation of the city was magnified. He found that from the many rooftops the city laid itself open for him and that unobserved he could paint local people going about their daily lives in the streets and houses below and gain a very real and intimate understanding of his subject. Lavery was interested in the effects of light and shadow and in Tangier, the play of the African sun on the white painted walls of the houses and on the expanse of sand which made up the beach gave him ample opportunity to indulge this interest.

Of all the subjects to be painted at Tangier, it was the wide sweep of the beach that was amongst his most favourite compositions. Taken from the cliffs above, the present view looks west along the curve of the bay up to the White City of Tangier on the horizon, silhouetted against the clear sky. The composition combines both a Whistlerian focus on the horizontal relationship between sky, sea and shore, with the intense bright light of the North African coast. As is evident in the fluid impasto of the waves in contrast to the foreshortened beach, Lavery had clearly enjoyed painting what was one of his much-loved aesthetic arrangements.
at 4:33 PM