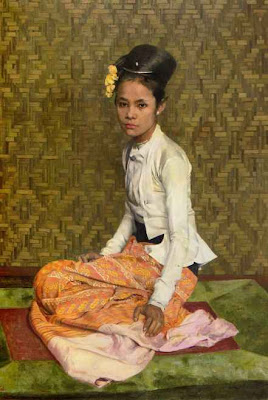 Of Irish heritage, Gerald Festus Kelly was born in London. Upon moving to Paris to study in 1900, he was introduced to Monet, Degas, Sickert, Renoir, Gauguin, Cezanne and Sargent, the latter two having a strong influence on his early portraiture.

Kelly experienced a failed love affair in 1908, and partly in reaction to this, sailed to Burma, where he became captivated by the landscape, people, and dancers; the latter inspired an important series in the artist's oeuvre, compatible the exoticism and rich palate he so admired in Gauguin's work. His friend, Somerset Maugham observed that 'his Burmese dancers.... have a strange impenetrability. Their gestures are enigmatic and very significant. They are charming, and there is something curiously erratic in their manner; with a sure instinct, and with a more definite feeling for decoration, than is possible in a portrait, Mr Kelly has given us the character of the East and we of our generation see it'.

Upon returning to Europe, Kelly enjoyed a highly successful career as a portrait painter, his sitters including T.S. Eliot, King George VI and Queen Elizabeth, Henry Clay Frick, Harold McMillan, Ralph Vaughan Williams and Mary Stokes. In 1949 he was elected President of the Royal Academy, and did much to introduce modern art into the Academy's exhibitions
at 1:00 PM