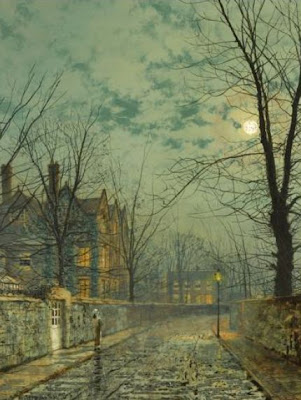 The blue and green tones of moonlight contrasted with the golden light of gaslight mark the contrast in Grimshaw's paintings of the man-made and natural, opposing forces symbolic of the contrasts of the age of industrialisation when the natural world was tamed, restrained and confined like never before. In Grimshaw's paintings there is also the contrast of the solidity of the built environment and the organic, unrestrained growth of the tree branches. In Evening Shadows Grimshaw painted an elegant ivy-clad suburban mansion beside which can be seen the roof of a conservatory. This suggests a further contrast, of the propagated and protected hot-house flowers and the wilder growth of the ivy spreading across the stone walls. In the nineteenth century, conservatories became fashionable as wealthy households sought to provide indoor-outdoor space in the cooler months. The hot-houses also allowed collectors to grow delicate flowers and plants. Grimshaw is known to have been fascinated by flowers and made sketches of various rare species observed in the collections of friends and patrons. He is also known to have disapproved of the pruning of shrubs and borders, preferring to allow the plants to grow undisturbed. Grimshaw made a conservatory the subject of one of his most successful figurative paintings Il Penseroso of 1875 (private collection) in which a young woman is seated amid sunlight and surrounded by orchids, ferns and other exotics.

The location of the conservatory is not known as there was not one built at Grimshaw's home Knostrop Hall.
|
at 6:00 AM