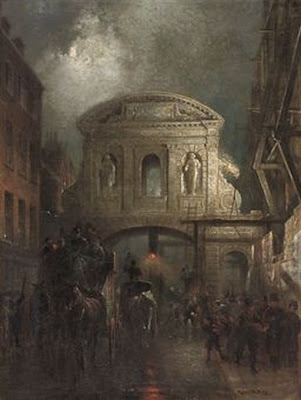 
Temple Bar is the only surviving gateway to the City of London. It was originally situated where Fleet Street now meets the Strand, deriving it's name from it's location next to Temple law courts. The gate is referenced as early as 1293 but the Portland stone arch depicted by Dudley was not erected until 1672 and was reputedly designed by Christopher Wren following the Great fire of London. As well as acting as a stage with which to display the heads and other body parts of traitors, the gate is probably most renowned for the ceremony, still performed today, which involves the monarch stopping to request permission to enter the City and the Lord Mayor presenting the Sword of State as a sign of loyalty. The gate was dismantled in 1878 to ease traffic and congestion and the stones were put into storage until the gate could be re-erected somewhere else. However in 1880 Sir Henry Meux, the brewer, bought the stones and used the gateway as the entrance to his park and mansion at Theobalds Park. The gate became out of use during the second half of the twentieth century following the transformation of Theobalds park to a conference centre and it wasn't until the creation of the Temple Bar Trust in 1976 that there was any intention of bringing the stones back to London. Finally in 2004 Temple Bar was rebuilt at it's present location next to Paternoster Square, adjacent to St Paul's Cathedral.

The stories these stones could tell... Very interesting post. Its a magnificent structure, depite its gruesome original intentions.
The queen actually stops at the gate today and asks permission to enter the city? I love that protocol.
Bisous

But can we say no! I'm not a fan of Royalty. I've seen this and they have done a great job. I hope the same for this:

What savages these planners are.

That is too sad. Unfortunately we are doing the same here. What I don't understand; We see shops open and close. They built a new plaza; if the shops close down instead of using the empty spaces, they demolish some icon of history to build another plaza. There is a big controversy going on right now about what to do with our beautiful Art Deco "Buffalo Central Railway Station." They claim the upkeep is too much. There are bidders that want to demolish to build a housing complex....Nothing is sacred anymore.