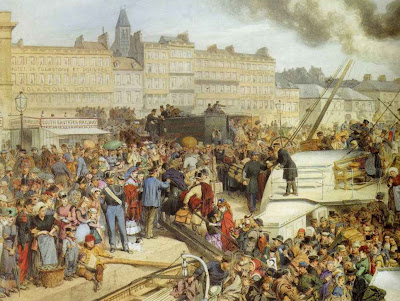 [The Tidal Packet Steamer arriving at Boulogne]
.
c. 1853 - 1874.
not Alfred William Hunt (1830 - 1896) but the lesser known Alfred Hunt, an illustrator and painter of panoramic scenes. Sometimes mistakenly seen as Arthur Hunt. A lot of his work was for the Illustrated London News in the 1860's.

watercolour and pen and ink over pencil
17 by 24 in.
Although it may have been thought at some time in the past that this fascinating and delightful watercolour was the work of the Liverpool-born Pre-Raphaelite landscapist Alfred William Hunt (1830-1896), it is in fact by a less well known, but nonetheless interesting, artist, the designer of illustrations and painter of panoramic modern-life subjects called Alfred Hunt (but who is sometimes mistakenly given the first name Arthur). This Hunt was a frequent contributor of wood block illustrations to the Illustrated London News in the 1860s. Gleeson White lists him among the designers of full page plates to the journal’s ‘Christmas numbers’ (where artists’ names were printed with the title in a caption below the image). In 1862, to cite just one of many examples, Hunt designed a print which was entitled ‘Half-crown day at the International Exhibition’.

The present subject, which shows the arrival of the cross-channel steam packet at Boulogne, with travellers disembarking the ship by gang-planks, while a French policeman and other officials of the shipping line watch on, was apparently reproduced as a lithographic plate by Leighton Brothers in 1853. It seems, therefore, to be an early work by the artist, pre-dating his designs for Illustrated London News. A few years later, Hunt made a replica of William Powell Frith’s modern-life subject Derby Day, the original of which was shown at the Royal Academy in 1858. The Alfred Hunt who drew Tidal Packet at Boulogne is probably the same artist who sent works to the Society of British Artists exhibitions in 1870-74, including one subject entitled Fishing Boats picking up Waifs and Strays after a Storm.