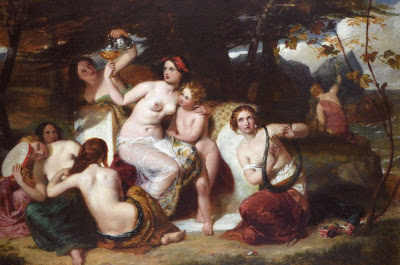 oil on canvas
31 by 50 in
In his choice of subjects for painting, Frederick Pickersgill demonstrated a love for English literature of the sixteenth and seventeenth centuries. The present work takes its subject from John Milton’s masque Comus, which was written and first performed in 1634. In the story Comus was a pagan god of Milton’s invention, the son of Circe and Bacchus, and one who preyed upon travellers, having the power of magic to turn them into wild beasts. In the masque, a nameless lady comes upon the scene, and is led by Comus – who pretends to be a shepherd – to a cottage, which turns by magic into a stately palace where she is tempted to drink a magic potion. She defends her virtue against Comus’ assault, and is rescued by her brothers and Sabrina, the goddess of the river Severn. In Pickersgill’s painting we see Comus’ mother, the malevolent figure of Circe, surrounded by her female attendants, educating her son in the destructive power of sorcery. Circe holds in her right hand a golden goblet into which is poured a quantity of the magic potion with which Comus will bewitch his wayfaring victims and by which means he will attempt to overcome the virtuous resistance of the lady.

Pickersgill’s first subject from Comus – which showed the lady being rescued by her brothers, who seize the phial of magic potion and dash it to the ground, and who are assisted by the spirit Thyris – appeared at the Royal Academy in 1844. A further subject showing Circe was shown in 1849. The present painting, representing an early scene in the masque, appears not to have been exhibited.

The 1840s and early 1850s saw Frederick Pickersgill come to prominence on the London artistic scene. In 1843 he had been awarded a prize of £100 for his cartoon The Death of Lear in the first competition for the decoration of the Palace of Westminster. His painting The Death of Harold (Palace of Westminster) caused a sensation at the second competition in 1847, winning first prize and being purchased by the commissioners. In the same year, he was elected an associate of the Royal Academy, where he was later to serve as Keeper.

In 1855 a biographical article on the artist concluded with the view that Pickersgill’s paintings ‘exhibit sound judgment and good taste in the selection of the subject [which is then] treated with delicacy of feeling and purity of expression … His style is altogether good, and the quality of his painting such as will test close observation, especially the works of the last five or six years, which manifest increased and increasing vigour of execution’ (‘British Artists: Their Style and Character No.VII – F.R. Pickersgill, A.R.A.’, Art Journal, 1855, pp.233-6).