Richard Redgrave - An Hour with the Poets 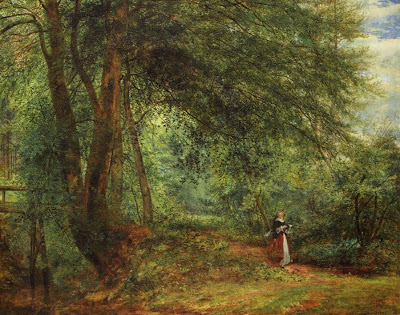 signed and dated l.r.: Rich'd Redgrave 1852-3; inscribed with the title and artist's address on an old label attached to the reverse

This view of a woodland path with a woman walking as she reads from a book of poetry was adapted from a large oil sketch (Christie’s, 13 October 1978, lot 180), dated 1852, that Redgrave made of the woods at Silverbeck near Abinger in Surrey, where lived his friend and fellow landscape painter James Clark Hook.

In 1853, when exhibited at the Royal Academy, An Hour with the Poets was described as ‘a large picture, describing a section of dense sylvan scenery, into which is introduced one figure – a lady reading. Every part of the picture is worked out with extraordinary truth and fidelity: the mass of the foreground is painted with the most ingenious tenuity of touch, and everywhere in this part of the picture the choicest imitation of nature prevails. The foliage is not less elaborate’ (Art Journal, 1853, p.149).

In the early 1850s, treating landscape subjects in minute detail and with intense colour was a recent innovation on the part of British painters, and one that was associated with members of the Pre-Raphaelite group. James Dafforne, in his 1859 biographical account of Redgrave, made clear that Redgrave was not part of this group, but nonetheless recommended the viewer to study the painter’s landscapes closely, for ‘in no other way will the spectator appreciate the delicacy and truth with which he represents nature … his feeling for nature is of the most refined order, his delineations of her simple and faithful’.