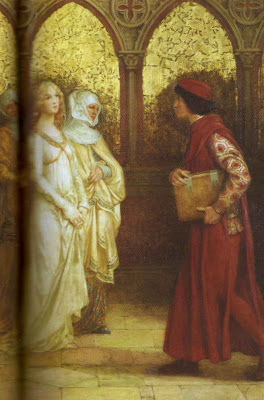 Elisabeth Sonrel was a painter of portraits, romantic figurative subjects, landscapes and rural subjects. She was born in Tours, the daughter of the artist Stéphane Sonrel, in 1874. She trained in Paris at the Ecole des Beaux-Arts under Jules Lefebvre. Her subject Pax et Labor (Tours Museum), painted while she was still a student in 1892 demonstrates her precocious talent. Sonrel made her debut as an exhibitor at the Salon in 1893. Her works there were noticed and on several occasions before the end of the century she received mentions honorables and medals. In 1900 she won a bronze medal for her exhibit Le Sommeil de la Vierge, painted in 1895, at the Exposition Universelle. Her professional career continued until 1941, and she died at Sceaux in 1953.

Sonrel’s early paintings, whether in oil or watercolour, almost always represent scenes from literature or the theatre, and usually show beautiful young women. It seems that the painter had the opportunity to study Renaissance art in the course of a journey to Italy, and that she particularly admired – and sought to emulate in her own work – the paintings of Botticelli. During this period she took subjects from Arthurian legend and Dante (the present painting showing Dante’s first sight of Beatrice as he passed her when walking in the streets of Florence is undoubtedly the product of this first phase in the artist’s career).

Whether Sonrel was also familiar with the work of the English Pre-Raphaelite painters, particularly that of Dante Gabriel Rossetti, is uncertain. Her early paintings are analogous to the works that British painters such as Henry Holiday and Edmund Blair Leighton painted in the last quarter of the nineteenth century in emulation of Pre-Raphaelite works of the 1850s. Sonrel may have been led to English Pre-Raphaelitism by the enthusiasm that French symbolist painters had for the works of Rossetti and Burne-Jones in the 1890s and in the first decade of the twentieth century.

In these early years Sonrel also designed posters, postcards and illustrations, working in an art nouveau style. After the turn of the century she turned to portraiture and landscape painting, the latter usually inspired by her native Brittany.