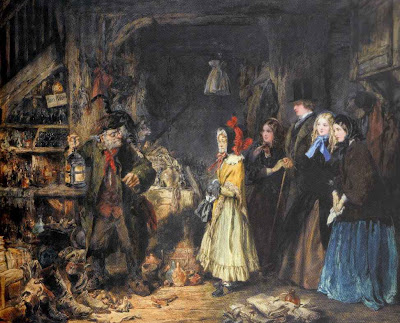 [Miss Flite introduces the wards in Jarndyce to the Lord Chancellor] 1860
Watercolour and bodycolour
from chapter five of Charles Dicken's Bleak House.

John Gilbert’s career as an artist began in 1838, in the first place working principally as an illustrator. In this capacity he was immensely prolific, producing designs for woodblock engravings for many contemporary novels and also contributing many thousands of illustrations for the Illustrated London News from the time of its founding in 1842. As an illustrator to literary texts, Gilbert is principally remembered for his designs for an illustrated complete works of Shakespeare (1856-8) and for Longfellow’s Poetical Works (1854, 1855). As a painter, he had sent works to the London exhibitions from the late 1830s. His Don Quixote giving advice to Sancho Panza, shown at the British Institution in 1841, is an early instance of his particular fondness for literary subjects, and from this time on the works of Cervantes served as a great inspiration. In the 1850s he worked largely as a watercolourist. Gilbert’s career as a watercolourist is closely associated with the Old Water-Colour Society. He was elected as an associate in 1852 and a member in 1854. He was a frequent exhibitor at the annual displays there, always showing elaborate and richly coloured figurative subjects. In 1871 Gilbert was elected president of the Old Water-Colour Society, and the following year he was knighted.

The present subject shows the moment in chapter five of Charles Dickens’s Bleak House when Miss Flite – an old lady who spends her days at the chancery courts, and whose only comfort are the caged birds she keeps – invites the litigants in the case of Jarndyce and Jarndyce, Richard Carstone and his cousin Ada Clare, along with the supposed orphan Esther Summerson and her friend Miss Jellyby, to the lodging house where she lives and of which the landlord was Mr Krook. This last character, one of Dickens’s most bizarre and disturbing inventions, although virtually illiterate and an inveterate drunkard, obsessively accumulates documents and other materials which he hopes may be used to implicate those who he may then be able to blackmail. Krook has in his possession the love letters exchanged by Lady Dedlock and Captain Hawdon, of which the affair with Esther was the outcome. However, before he understands their significance, he is destroyed by an unexplained spontaneous combustion – apparently brought on by his vast consumption of gin.

The scene described is one of classic Dickensian urban gloom: ‘As it was still foggy and dark, and as the shop was blinded besides by the wall of Lincoln’s Inn, intercepting the light within a couple of yards, we should not have seen so much but for a lighted lantern that an old man in spectacles and a hairy cap was carrying about in the shop. Turning towards the door, he now caught sight of us. He was short, cadaverous, and withered; with his head sunk sideways between his shoulders, and the breath issuing in visible smoke from his mouth, as if he were on fire within. His throat, chin, and eyebrows were so frosted with white hairs, and so gnarled with veins and puckered skin, that he looked from his breast upward, like some old root in a fall of snow. “Hi hi!” said the old man, coming to the door. “Have you anything to sell?”’ Miss Flite makes an introduction: ‘“My landlord, Krook,” said the old lady, condescending to him from the lofty station as she presented him to us. “He is called among the neighbours the Lord Chancellor. His shop is called the Court of Chancery. He is a very eccentric person. He is very odd. Oh, I assure you he is very odd!”’

Gilbert’s watercolour shows the interior of Krook’s shop, with Krook himself and his malevolent cat Lady Jane present. Miss Flite faces him, while behind her are Richard Carstone with Ester, on his right, and the fair-headed and beautiful Ada, on his left. The bad-tempered Miss Jellyby stands with them. The contents of the interior are as described by Dickens: ‘Everything seemed to be bought, and nothing to be sold there. In all parts of the window, were quantities of dirty bottles: blacking bottles, medicine bottles, ginger-beer and soda-water bottles, pickle bottles, wine bottles, ink bottles’. Furthermore, ‘there was a little tottering bench of shabby old volumes … labelled “Law Books, all at 9d.” … ‘A little way within the shop-door, lay heaps of old crackled parchment scrolls, and discoloured and dog’s-eared law-papers’. Krook explains: ‘“You see I have so many things here,” he resumed, holding up the lantern, “of so many kinds, and all as the neighbours think (but they know nothing), wasting away and going to rack and ruin, that that’s why they have given me and my place a christening. And I have so many old parchmentses and papers in my stock. And I have a liking for rust and must and cobwebs. And all’s fish that comes to my net. And I can’t bear to part with anything I once lay hold of (or so my neighbours think, but what do they know) or to alter anything, or to have any sweeping, nor scouring, nor cleaning, nor repairing going on about me. That’s the way I’ve got the ill name of Chancery. I don’t mind. I go to see my noble and learned brother pretty well every day, when he sits in the Inn. He don’t notice me, but I notice him. There’s no great odds betwixt us. We both grub on in a muddle. Hi, Lady Jane!”’ A large grey cat leapt from some neighbouring shelf on his shoulder, and startled us all’.

Bleak House was published in monthly instalments in 1852-3, and although not at first regarded as to the standard of the author’s earlier books, became widely familiar to and much loved by the mid-Victorian reading public. As J. Hillis Miller wrote of it in 1971, ‘in writing Bleak House Dickens constructed a model in little of English society in his time. In no other of his novels is the canvas broader, the sweep more inclusive, the linguistic and dramatic texture richer, the gallery of comic grotesques more extraordinary’.

Gilbert’s five exhibits at the Old Water-Colour Society exhibition of 1860, of which the Bleak House subject was one, were especially praised by the critic of the Art Journal. In connection with the present watercolour, it was even observed that ‘it would be refreshing to abuse Mr Gilbert a little, for we are weary of the praise he compels from us. It is enough to say that there is no other living artist who could thus outdo Dickens in a rag and bottle narrative’. The critic of the Athenaeum also approved the subject: ‘The best and largest of Mr Gilbert’s works is “Miss Flite introduces the Wards in Chancery to ‘The Lord Chancellor’.” Miss Flite’s figure is full of character and a humour that is not without pathos; the faces of the wards are pretty and diverse in aspect; His Lordship’s appearance is well suggested’ (quoted ‘Sir John Gilbert, RA’, The Old Water-Colour Society’s Club, Tenth Annual Volume, 1932-1933’, 1933, pp.34-5).