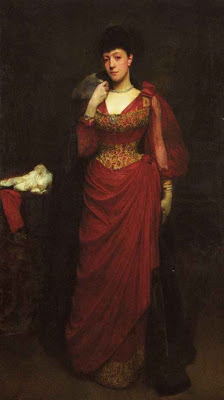 [Portrait of a Lady in a Red Dress with a Shawl, by tradition Bessie Burton]
.
1859 - 1944.
http://www.npg.org.uk/live/search/person.asp?LinkID=mp05520
http://www.artmagick.com/pictures/artist.aspx?artist=william-logsdail

The great success of Logsdail's portrait of his daughter Mary, entitled An Early Victorian (Usher Gallery, Lincoln) which was voted 'Picture of the Year' at the Royal Academy exhibition of 1907 led to an influx of portrait commissions. Whilst Logsdail's earlier portrait commissions tended to be small in scale and of family and friends, his later portraits were more flamboyant and elegant. He took to painting portraits with enthusiasm and unlike other artists who disliked having to paint portraits Logsdail was happy to accept commissions. He wrote '... no more rising at dawn, no more searching for models and paying them for their services, no more out in the open at the mercy of all weathers with all the difficulties of complicated subjects, no more doubt as to the sale of my work when done. Instead of all this, while I remained quietly in my comfortable studio my models sought me one after another at the reasonable hour of 10 or 11 and actually paid me hundreds of pounds to paint their valuable selves.' (William Logsdail 1859-1944, A Distinguished Painter, catalogue for an exhibition held at the Usher Gallery in Lincoln, 1994, p. 52). In 1912 Logsdail's prominence as a portrait painter was recognised when he was elected a member of the Royal Society of Portrait painters and as has been noted 'As with Sargent's Society Portraits of the Edwardian era, Logsdail's formal portraits of the aristocracy capture the atmosphere of a period, no less than the character of the individual concerned.' (ibid Usher Gallery, p. 52)
at 8:00 AM