John Atkinson Grimshaw - After the Shower 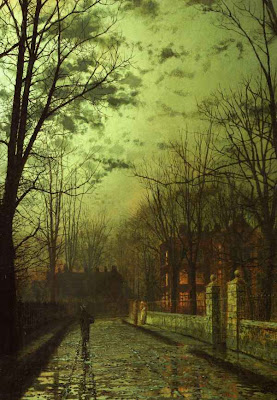 After the Shower is a prime example of John Atkinson Grimshaw's moonlit subjects painted at the height of the artist's power.

Having defaulted on a debt from the previous year 1880 was a time of financial hardship for Grimshaw. However from an artistic perspective it was a time of expansion and success. He rented a studio in Manresa Road, Chelsea where he met and became close friends with James Abbott McNeill Whistler and his work Endymion on Mount Laurus was exhibited at the Royal Academy (no.325).

The present work is a display of the artist's extraordinary ability to depict atmosphere with the teal-tinted clouds, the leafless, autumnal trees and the rain soaked street acting in perfect harmony to create the sense of stillness and calm following a downpour. The light source from the high, full moon creates and demands an intricate and extensive pattern of reflection on the soaked road.

The essence of nature is tempered by the meticulous treatment of the architecture in this wealthy suburb. Grimshaw juxtaposes natural light with artificial light as our gaze is drawn to the glow from the grand town house. This focuses our attention on the human element of the work; the figure, so often solitary in Grimshaw's work, is joined by a couple producing a tantalising but subtle suggestion of romance. The sense of mystery is further enhanced by the anonymity of the scene with the exact location withheld.

The Victorians had a huge appetite for such romantic intrigue and it was a prevalent theme in the novels, plays and poetry of the age. Grimshaw himself was inspired by the writings of Wordsworth, Browning, Shelley and in particular Tennyson. Robert Alexander sums up thus,

'A few lines from Tennyson's Enoch Arden seem to demonstrate this most succinctly:

The climbing street, the mill, the leafy lanes,
The peacock-yewtree and the lonely Hall,
The horse he drove, the boat he sold, the chill
November dawns and dewy glooming downs,
The gentle shower, the smell of dying leaves

I came along this painting through the cover of a novel by Wlikie Collins in Penguin Popular Classics, and browsing about the author... to your blog. I love the painting, the atmosphere it conveys.
A Spanish teacher of English

Thank you, he was a wonderful painter and atmospheric is a great word to describe him.