Edward Stott - In the Orchard 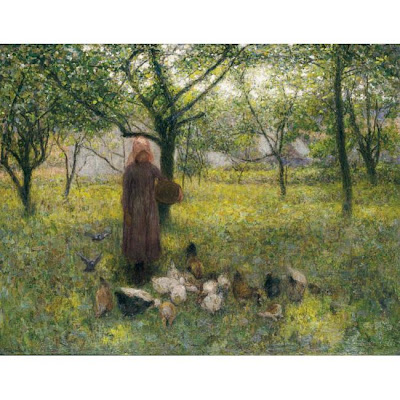 [In the Orchard] c. 1892
signed l.l.: Edward Stott
oil on canvas
21 ½ by 27 in.
The sketch on the reverse of this finished painting by Stott was made in preparation for On a Summer Afternoon which was exhibited with In the Orchard at the New Gallery in 1892. The Art Journal, defined the qualities of On a Summer Afternoon as follows: 'a combined impression of the artist's feeling - colour and form with the character of the subject, whether light or delicate; or strong and powerful; in short a recording of the impression on the painter's nature' (Art Journal, 1893, p. 104). This assessment could equally be applied to In the Orchard.
http://www.tate.org.uk/servlet/ArtistWorks?cgroupid=999999961&artistid=532&page=1
http://artprints.leeds.gov.uk/index.cfm?event=catalogue.artist&artistID=5006

Born in Rochdale, Lancashire, Stott trained in Manchester and under Cabanel at the Ecole des Beaux-Arts in Paris. His early works were influenced by Millet and Bastien-Lepage and his paintings of English rural life, around his home at Amberley in Sussex, have ideas in common with the Newlyn School. Later he adopted a virtually pointillist technique and also extended the range of his subjects to include Biblical themes. He was a founder member of the New English Art Club in 1886. Stott, a bachelor, left most of his money to the Royal Academy for travelling scholarships.