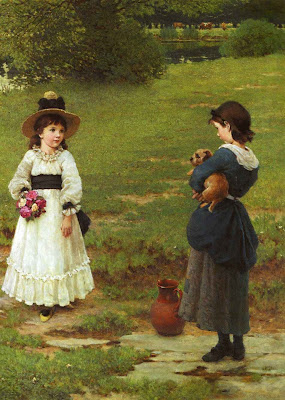 signed l.l.: G. D. LESLIE; signed and inscribed with the artist's address on the stretcher

G.D. Leslie’s 1907 painting of two girls meeting in a Thames-side landscape – one fashionably dressed and standing with a self-conscious air, the other plainly dressed and at ease in her rural soundings – is inspired by Aesop’s fable of the town mouse and the country mouse:

Now you must know that a town mouse once upon a time went on a visit to his cousin in the country. He was rough and ready, this cousin, but he loved his town friend and made him heartily welcome. Beans and bacon, cheese and bread, were all he had to offer, but he offered them freely. The town mouse rather turned up his long nose at this country fare, and said, ‘I cannot understand, cousin, how you can put up with such poor food as this, but of course you cannot expect anything better in the country; come you with me and I will show you how to live. When you have been in town a week you will wonder how you could ever have stood a country life.’

Aesop’s fables were much loved in Edwardian England. Beatrix Potter was to publish her own reinterpretation of the legend of the Town Mouse and Country Mouse in The Tale of Johnny Town-mouse (1918).

G.D. Leslie trained under his father, Charles Robert Leslie, RA, and also at the Royal Academy schools. For a period he was influenced by Pre-Raphaelitism, but later turned to classical-mythological subjects such as Nausicaa and her maids (shown at the Royal Academy in 1871). Eventually he adopted his characteristic aestheticised figurative arrangements usually showing young women and children in domestic interiors and landscape settings.

Leslie lived in St John’s Wood and was part of the artistic grouping known as ‘The Clique’ of which Philip Hermogenes Calderon, William Frederick Yeames, George Adolphus Storey, Fred Walker and Marcus Stone were members. Leslie had a country house near Wallingford on the River Thames, where many of his paintings – presumably including the present – were set. Leslie wrote a memoir of the life he led among painters living along the river Our River (1888).
at 8:01 AM