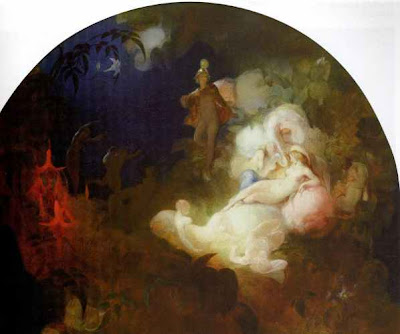 This subject from Shakespeare’s A Midsummer Night’s Dream shows the sleeping figure of Titania and King Oberon with whom Titania had fallen out because of his jealousy of her affection for a changeling boy, standing beyond. All around are fairy attendants of Titania, and the flowers and foliage of the enchanted wood where she sleeps. Oberon had described this place to his fairy servant Puck:

I know a bank where the wild thyme blows,
Where oxslips and the nodding violet grows,
Quite over-canopied with luscious woodbine,
With sweet musk-roses, and with eglantine;
There sleeps Titania sometime of the night,
Lull’d in these flowers with dances and delight.
(Act 2; Scene 1)

Puck provided Oberon with a magic flower, the juice of which he will place upon the eyes of Titania, causing her to fall in love with the person she sees first when awakened.

The present painting presumably represents a first compositional scheme for a similarly arch-shaped subject entitled The Midsummer Night’s Fairies (Tate Gallery) which was exhibited at the Royal Academy in 1847 with a full title which included part of Oberon’s speech to Puck as quoted above. The moment represented in each is the same, and scale of figures comparable; however, the composition in the Tate version has been re-arranged with the sleeping Titania moved to the left side and the foreground occupied by a battle between a snail and a group of fairy soldiers. A further version of the subject, given the title Titania asleep, was part of the distinguished collection of Charles and Lavinia Handley-Read, and was later in the Forbes Magazine collection (sold, Christie’s, London, 19 February 2003, lot 2).

The Royal Academy exhibit and the Handley-Read version of the present subject, each of which incorporate painted proscenium arches with grisaille figures, have the distinctive crisp handling which Huskisson seems to have devised on the basis of study of other painters of fairy subjects. The present study is more richly handled and with a painterly quality that lends itself well to the nocturnal subject and the luminosity of the figures and the flowers.

The choice of subject furthermore reveals Huskisson’s knowledge of Dadd’s work. In 1841 Dadd had exhibited his own Titania sleeping (Musée du Louvre, Paris), the success of which had established that painter’s reputation. Huskisson’s debt to Dadd’s original may be seen in the luminescent spotlighting of the figure of Titania and her attendant fairies, the placing of Oberon in the shadowed background, and the use of an arch-shaped composition to allude to the subject’s origin on a stage and within a proscenium arch. Patricia Allderidge has suggested that Dadd saw the engraving of Huskisson’s Titania sleeping that appeared in the Art Union in 1848 (see Fig.1 detail) after his imprisonment following his murder of his father, citing among other borrowings from Huskisson’s image the treatment of the male figure in his subject Sketch of the Passions. Hatred (Bethlem Royal Hospital and the Maudley Hospital), of 1853, as dependent on Huskisson’s figure of Oberon (see The Late Richard Dadd, exhibition catalogue, Tate Gallery, 1974, p.88).

Although Huskisson had shown at the Royal Academy since 1838 - his earlier works seeming to have been of genre subjects and street scenes - his 1847 exhibit represented his adoption of the type of fairy subject for which he is remembered. It seems that the painting was received enthusiastically. The Art Union engraving of it was accompanied by the following description:

'The little picture is wonderful in every part; there is not a portion of it which has not been studied and painted with a truth and delicacy inimitable: in conception it is truly original, and in execution admirable. The work was hung most advantageously at the Royal Academy, and attracted very great attention, inasmuch as the name of the painter was heretofore comparatively unknown. As we anticipated, however, it brought him numerous commissions, and we shall be greatly mistaken if we do not find him, ere long, occupying a distinguished place among the leading artists of our time. '

Huskisson seems to have gained the particular support of Samuel Carter Hall, an influential art commentator and editor of the Art Union and its successor the Art Journal. In 1848 Huskisson made a series of illustrations to a story written by Anna Maria Feilding (who was S.C. Hall’s wife), Midsummer Eve: A Fairy Tale of Love, an experience which perhaps confirmed Huskisson as a specialist in fairy subjects. Mr and Mrs Hall had several paintings of fairy subjects by Huskisson in their collection.

Robert Huskisson, who had been born in Nottingham, and seems to have been trained as an artist by his father who was a provincial portrait painter, Henry Huskinson (as the family name had previously been spelt), and was living in London, sharing accommodation with his brother Leonard, by the late 1830s. Although Huskisson remains a shadowy figure, known principally for his delightful fairy subjects, mention should be made of his (if it is in fact by the same Robert Huskisson) oil subject Lord Northwick’s Picture Gallery at Thirlstaine House (Yale Center for British Art, New Haven), which is usually dated to c.1846-7, and which shows extraordinary skill in the replication of the contents of the interior. However, S.C. Hall’s prediction of Huskisson’s destiny proved illusory; for some reason he ceased to exhibit in 1854, perhaps because of ill health, and in 1861, aged only forty-two, he died. No obituary was published in the Art Journal (successor to the Art Union), so it must be assumed that Huskisson had even by that time sunk into obscurity. His modern reputation owes much to the pioneering investigations of the late Jeremy Maas. Huskisson was represented by four works in the Royal Academy’s 1997 exhibition Victorian Fairy Painting, the first of these being the Tate’s The Midsummer Night’s Fairies.