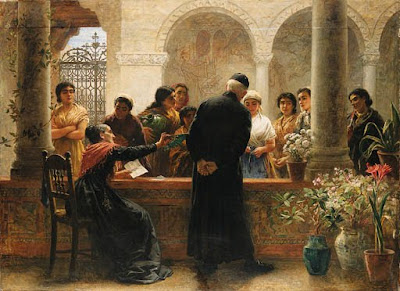 Long began painting Spanish subjects in 1857 and they continued to be a major focus of his work until the early 1870s. The present example resembles two other religious scenes from this period, An Easter Vigil in a Cathedral at Seville (1871) and Good Advice (1871). The three central figures of these two works are repeated in our picture: the priest, the old woman to his left, and the young woman illuminated to his right. The theme of the elderly advising the young is also continued here, and the letter in Good Advice now appears in the hands of the old woman.

Long first experimented with classical painting in 1873, and historical details in his works become more apparent from this date. The arches in this painting resemble those in one of his most important historical scenes, The Suppliants: Expulsion of the Gypsies from Spain (1872). Likewise, the details on the front and back walls in the present work relate to his first real classical picture, A Dorcas Meeting in the 6th Century (1873-77).

We are grateful to Mark Bills of the Russell-Cotes Art Gallery and Museum, Bournemouth for his help in the preparation of this catalogue entry.
at 6:00 AM