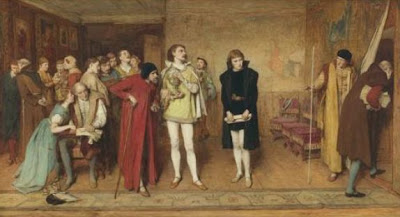 When the picture was exhibited at the Royal Academy it was highly acclaimed, one critic writing; 'The Duke's Antechamber is very cleverly treated by Mr. Orchardson' (Athenaeum, 1869, p.675) whilst another wrote that; 'Unquestionably the work has done much to advance the reputation of the painter in public opinion' (James
Dafforne, 'British Artists: Their Style and Character, William Quiller Orchardson, A.R.A.', in Art Journal, 1870, p.244) and another felt that it was 'The greatest work the artist has yet produced.' (Art Journal, 1869, p.163)

The Duke's Antechamber is a relatively early work by Orchardson painted at a time when he was seeking critical acclaim with a series of depictions of Shakespearian romance painted in his London studio. The influence of John Everett Millais is clear in Orchardson's paintings of the 1860s and it was the narrative force and technical dexterity that earned him Associateship of the Royal Academy in 1869, a year before he exhibited The Duke's Antechamber.
at 6:00 AM