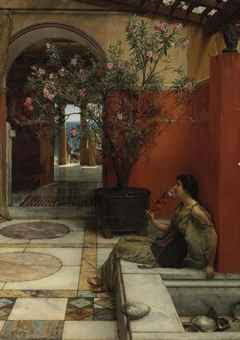 An Oleander represents Alma-Tadema at the height of his career and according to J.E. Hodgson, An Oleander was 'Nature and invention dovetailed'. Swanson writes that the artist was 'fond of glimpses into distant views and during this period the contrast of warm foregrounds against the cool blues of the ocean in his backgrounds offer beautiful juxtapositions. An Oleander is probably the best example of Alma-Tadema's playing with foreground and background contrasts of light, detail and color' (V.G.Swanson, The Biography and Catalogue Raisonné of the Paintings of Sir Lawrence Alma-Tadema, London, 1990, p. 219).

In 1878 Alma-Tadema and his wife Laura spent three months travelling on the continent and he wrote with enthusiasm of the Romantic appeal of Italy: 'Oranges and lemons, olives and springflowers, brown sunkissed mankind young and old, graceful and strong, sometimes very beautiful. Fine art and antiquity.' (Letter to F.G. Stevens, 18 April 1878, F.G. Stevens Archive, Bodleian Library, Oxford). His paintings of the time reflect an interest in the city of Rome, Pompeii and other Italian subjects. 1878 also saw the election of Frederic Leighton as President of the Royal Academy, following the death of Sir Francis Grant. This change of regime ensured that classicism, now firmly allied with traditional modes of representation, flourished along with the Academy. The following year Alma-Tadema was elected a full Academician. He was one of a number of young artists working in Britain who brought new approaches to the representation of the classical work, but it is his unique type of historical genre painting which is the defining force of the new classical-subject movement of the time.

1882 was the year the Alma-Tadema presented his Diploma picture (a work presented to the Academy by all newly elected members) entitled The Way to the Temple. This bears many similarities to the present work. It depicts a woman seated at the entrance of a temple selling votive statuettes. The viewer's eye is drawn to the background where we are given an intriguing glimpse of a Bacchic procession and the sea far beyond. However, contemporary critics strongly favored An Oleander as a composition, for its sumptuous interior showing a woman next to an oleander plant, also exhibited at the 1883 Academy exhibition. While The Way to the Temple demonstrates the same clever perspective and interesting look at ancient social life as An Oleander, it lacks the stunning color scheme displayed by the present lot. An Oleander features a woman in a seductive robe with revealing sleeves who sits on the edge of a marble bath which is filled with exotic shells; as she appears to day-dream as she enjoys the heavy scent of an oleander flower. The rich red walls behind her add to the intoxicating atmosphere and emphasize the romantic narrative of the painting. In the far distance, it appears that a party is leaving by boat, stressing the sense of longing and separation.

The oleander tree is native to the Mediterranean. It has several legends attached to it and in Greek mythology it symbolized romance and charm. The Biblical Rose of Jericho is also thought to refer to the oleander and medicinal use of the oleander plant dates back at least 3500 years.
at 6:00 AM

Exquisite...I love the ancient Roman look of the baths. How relaxing it must've been. She looks very beautiful in her daydream state. I thought Oleanders could also be poisonous.
hugs
Marta

Thank you. Hope you had a good Christmas. I've been to the Roman Baths in Bath. Fascinating.