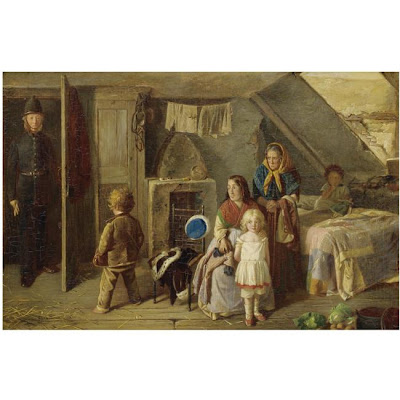 'Stolen children were great subjects with the Victorians. Here a little girl has been stolen and is just having her smart clothes removed. But she has been traced and the policeman (no great shakes, is he?) is coming in at the door, faced by the defiant little boy. The colour of the patch-work quilt is pleasing and I like the attitude of the little boy, full of fight.' Sir David Scott

Charles Hunt's The Stolen Child has as its setting the squalid garret of an impoverished family. They have abducted a child, hoping presumably to demand a ransom for her return to her own parents. The stolen child stands before a villainous looking woman, stripped to her undergarments, and restrained by a rough hand at her neck. At the doorway stands a policeman who has uncovered the crime, and who arrives to rescue the child.

Hunt's genre subjects serve as commentaries on the lives of the poor and dispossessed in the period, whether treated critically with cold dispassion or as on other occasions with humour. Many of his subjects were set in Ireland, or represent Irish migrants to England. The two women shown, and the two other children – one of whom cowers in the background while the other seems willing to stand up to and fight the approaching officer – are surely intended to be identified as Irish, by the style of their dress and physical appearance, as well as by motifs, such as the potatoes and cabbages strewn across the floor in the foregrounds, which correspond to disparaging racial stereotypes of the period. Their menfolk, who are assumed to have been responsible for the theft of the child, are absent, presumably out on some nefarious business, their clay pipes rest on the mantle-shelf. Graham Reynolds regarded Charles Hunt as one of a group of 'unknown artists who painted modern life in the 1850s and [who] attained a standard of achievement which ensures their continuing interest' (Victorian Painting, pp. 113-6).