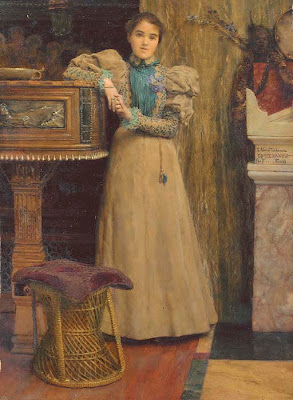 The English sculptor Edward Onslow Ford's daughter, who later married Philip Riviere and then Bertram Widdrington, is depicted standing in Alma-Tadema's studio at 17 Grove End Road, St John's Wood, leaning on his famous pianoforte. Originally the portrait was traded by Alma-Tadema with Onslow Ford in return for a copy of Ford's Royal Academy Diploma sculpture, a bust of Alma-Tadema (Fig. 1). Alma-Tadema was a special friend of several other sculptors including, Jules Dalou of Paris, G.B. Amendola of Naples, George Simonds and Hamo Thornycroft of London and the American Moses Ezekiel.

The Alma-Tademas first foray in exotic interior decoration came in 1871 when they bought Townshend House and remodelled it to their own taste. They decorated it with Pompeian motifs, German glass, Mexican onyx, Spanish leather, Chinese lanterns, Dutch silver and woodwork, Japanese art, rare marble and Victorian ornaments. The pianoforte was housed in the Gold Room (Fig. 2). Later, they bought a house in Grove End Road after Townshend House was damaged by an explosion from a barge loaded with gunpowder and benzoline on the Regent's Canal in 1874.

The pianoforte was housed in the studio alcove of 17 Grove End Road (Fig. 3), which Alma-Tadema designed himself with the technical assistance of his neighbour, the architect Alfred Calderon. Originally of late eighteenth-century Dutch inspiration, the house had undergone many alterations by Tissot, its previous owner, who added a studio and a conservatory. Over the next twenty-six years it is reported that Alma-Tadema spent over £26,000 on renovations. One visitor recorded 'His house is a glimpse of his work, it is his soul seen from the interior. Whoever understands his house learns to cherish his art.' (Swanson, op. cit., 1990, p. 66).

The renovated and enlarged house allowed Alma-Tadema to entertain on a lavish scale during his Monday afternoon openings and his Tuesday evening dinners and concerts. His love of music made his unique studio the setting for a series of concerts. The testimony to his star-studded guest lists was written beneath the lid of the piano where large panels of ivory bore the signatures of musicians such as Clara Schumann, Joseph Joachim, Anton Rubinstein, Camille Saint-Saëns and Pablo de Sarasate. Unfortunately, the piano was destroyed in an air raid during the Second World War, whilst it was in a London warehouse.

Alma-Tadema was also associated with another spectacular piano. In 1884 he was commissioned to provide a suite of furniture for the American connoisseur Henry G. Marquand (1819-1902). Marquand, a creator and Director of the Metropolitan Museum of Art, New York, granted Alma-Tadema a limitless budget to embellish the Music Salon of his Madison Avenue mansion in his antique style, and in a sumptuous manner which would serve as a worthy focal point of New York society during the City's late nineteenth century Golden Age. This piano and its pair of stools was sold at Christie's, London, 7 November 1997, lot 86 (£650,000).

We are grateful to Professor Vern Swanson, Springville Museum of Art, Utah, for his help in the preparation of this catalogue entry.
at 6:00 AM