In Search of Biblical Lands exhibition 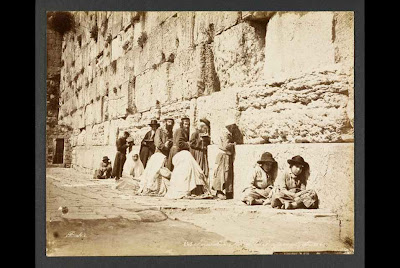 LAS ANGELES, CA.- In Search of Biblical Lands: From Jerusalem to Jordan in 19th-Century Photography on view at the Getty Villa from March 2 through September 12, 2011, features some of the first photographic images of the eastern margins of the Mediterranean. This region is one of the most photographed places on earth, with subjects ranging from architectural sites to evocative geography, scenes of pastoral life, and its people. The photographs on view in this exhibition reveal what the travelers of the 1800s discovered on their journey: a landscape of belief, at once familiar yet still mysterious.

In Search of Biblical Lands: From Jerusalem to Jordan in 19th-Century Photography features rare, early daguerreotypes, salted-paper prints, and albumen silver prints, created between the 1840s and 1900s by the leading photographers of the time, including Felice Beato, Maxime Du Camp, Auguste Salzmann, James Graham, Louis Vignes, Frank Mason Good, and Frederic Goupil-Fesquet. Due to the delicate nature of photographic materials that cannot be displayed for long periods, this exhibition features more than 100 photographs in total, divided into two installments, each on view for three-months.

Organized into five sections—Jerusalem, Early Views, Peoples of the Bible, Travels in Bible Lands, and Expeditions Beyond the Dead Sea—the photographs, made for study by scholars or produced as souvenirs as well as works of art, were presented by photographers and publishers in ways designed to foster viewers’ religious identification with the region. Subjects include Bethlehem, Nazareth, Petra, the Church of the Holy Sepulchre, Damascus Gate, Saint Stephen’s Gate, the Ecce Homo Arch, the Al Aqsa Mosque, Walls of the Temple Mount, The Garden of Gethsemane, the Dome of the Rock, the River Jordan, the Pool of Hezekiah, and Jerusalem from the Mount of Olives.

Propelled by a connection to the Old and New Testaments of the Bible and encouraged by texts recently discovered in Egypt and Assyria, explorers, entrepreneurs, amateurs, academics, and tourists alike descended upon the Holy Land in the 19th century to be among the first to photograph the sites previously only imagined and represented in paintings, prints, and drawings. The advent of photography and the increasing popularity of travel provided a new standard for authenticity, immediacy, and truthfulness in pictorial representations, fundamentally changing aesthetic and scholarly approaches to ancient places.

But the birth of photography also presented a challenge for those taking the pictures as they wrestled with recording and interpreting this land that fused geography with history, mystery, and belief. While the shared legacy of Jewish, Christian, and Islamic faiths formed a space of enormous spiritual significance, there was pressure to make images that assured people that the landscape and places so important to them from Bible study or religious observance were real, if not dramatic. It proved no easy task, as what they saw did not fit with the Holy Land of their imagination, fostered by idealized illustrations and even common rhetoric—Jerusalem being the “shining city on the hill” or Palestine “the land of milk and honey.”

“There were no big ruins as in Egypt, no soaring mountains as in the American West, but the humble reality of small villages, ancient footpaths winding along steep hillsides, had tremendous emotional weight for people,” explains Kathleen Stewart Howe, Sarah Rempel and Herbert S. Rempel 23 Director of the Pomona College Museum of Art and professor of Art History and guest curator of this exhibition. “Ultimately, reality trumped spectacular effects.”

Peddlers in Jerusalem, lepers, shepherds dressed in native costumes, and tourists camping on horseback are just some of the images that speak to the tourist fascination with the Holy Land. They are shown through photographs, photographically illustrated books, and albums, many of which were made by the studio of French photographer Félix Bonfils (18311885) and collected by the Department of Photographs of the J. Paul Getty Museum and the Getty Research Institute, the latter by means of a recent acquisition from the Orientalist Photography Collection of 4,500 photographic images of the Middle East and North Africa.

Highlights of the exhibition are photographs by English photographer Francis Frith (18221898), whose compelling images were made during three trips to the Holy Land in the late 1850s, and daguerreotypes by French photographer Joseph-Philibert Girault de Prangey (18041892) from his three-year tour of the Near East, culled from the Getty Museum’s collection.

Visitors can see the region up-close through stereoscope tours on two large stereo viewers that digitally replicate the three-dimensional immersive experience. Each viewer has a selection of 12 cards that recreate a journey around Jerusalem and Palestine with particular attention paid to objects and places of interest and local color connected through scriptural citation.

Also of considerable note are a series of photographs made during the Duc de Luynes subsidized expedition to the Dead Sea and beyond, including views of ruined Crusader castles in what is now Jordan, and of Petra, the city carved out of rosy sandstone that had been first visited by Europeans in 1828 and is now a world heritage site in Jordan. These rare images come from the GRI’s acquisition of the entire publication of the Duc de Luyne voyage.

In Search of Biblical Lands: From Jerusalem to Jordan in 19th-Century Photography is guest curated by Kathleen Stewart Howe, Sarah Rempel and Herbert S. Rempel 23 Director of the Pomona College Museum of Art and Professor of Art History. Dr. Howe participated in the Getty’s Museum Leadership Institute program and was formerly an intern in the Department of Photographs. She is the author of Revealing the Holy Land: The Photographic Exploration of Palestine, published by the Santa Barbara Museum of Art, 1997.
at 1:00 PM

Realistically I would not be able to get there, but wouldn't it be amazing to see the photographs collectively.

I have seen dozens made for study by scholars, or produced as souvenirs, or as works of art. But most of the Victorian photos and paintings I have seen seem to be fulfilling a spiritual need in the photographer. Victorian Christians really did want to see the actual birth place of Jesus and the real Via Delorosa etc.

I hope those intrepid Victorian photographers and artists weren't disappointed.

I think it helped to give them a sense of historical reassurance, in a time of increasing scholarly doubts.