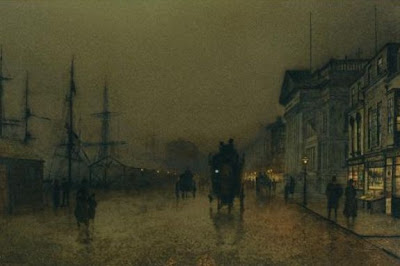 The present picture depicts Salthouse Docks in Liverpool, among Grimshaw's favourite subjects. Its ever expanding, state-of-the-art docks and newly wealthy inhabitants made the city ideally representative of its time. Grimshaw depicts contemporary life with a romance more akin to Tennyson (his favourite poet) than to how Charles
Dickens famously described the harsh realities of a northern industrial town: 'Now the clustered roofs, and piles of buildings, trembling, trembling with the working of engines, and dimly resounding with their shrieks and throbbings; the tall chimneys vomiting forth a black vapour, which hung in a dense ill-favoured cloud above the housetops and filled the air with gloom; the clank of hammers beating upon iron, the roar of busy streets and noisy crowds, gradually augmenting until all the various sounds blended into one and none was distinguishable for itself' (Old
Curiosity Shop).

On the exhibition of a painting of Salthouse Docks at the Royal Academy, the Art Journal wrote that the artist "invests the subject with something akin to poetry". John Atkinson Grimshaw was fascinated by modern industry, frequently painting the commercial centres of Leeds, Liverpool, Glasgow, Scarborough and Hull. He painted at
night, using moonlight to transform the sooty reality of the industrial North into an image of romance and mystery: air thick with pollution becomes an atmospheric mist enveloping the dark figures; moonlight reflects off cobbles, glistening with recently fallen rain; long shadows are thrown across the foreground by the golden lights illuminating the shop fronts.


The Salthouse Docks were designed by Thomas Steers, England's first major civil engineer, the architect of the world's first wet dock and Mayor of Liverpool. Completed after his death in 1750, it marked the beginning of Liverpool's transformation into one of England's major ports of the nineteenth century. The view here is of The Strand, once the commerical centre of the city, with the Old Customs House looking out across the River Mersey. Grimshaw's painting of Liverpool's civic buildings facing the ships that were the source of its wealth would have
appealed greatly both to the public at the Royal Academy and to his Northern patrons. They are a remarkable record of the ambition of this proud city and the considerable romance of the industrial age.
at 6:00 AM

Hi Hermes, this painting is very dark and mysterious, and Dickensian and wonderful. The relationship of art to poetry is surely very close, both are enormously varied but as in all art communicate something beyond the surface appearance????
Hope you are coping with the terrible freeze, and hope your health is OK - we in cyberspace need you! Happy Christmas, etc. cheers, cm

Thank you, what a good comment. Stopped snowing here now but very cold. I'm getting slowly better but not a good few years really. Still I'm still breathing and I'm an optimist at heart.