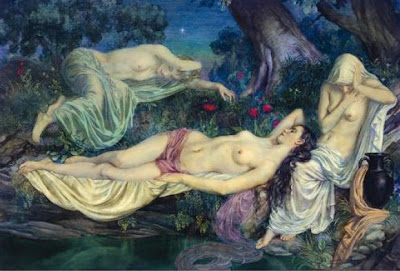 
Apperley has been described as one of the finest of the last romantics. Descended from a long noble line of the d'Apperleys of Normandy, he was also the grandson of the famous sporting journalist 'Nimrod'. His ambition to be an artist was fulfilled at an early age, studying at Herkomer Academy, at Bushey, and first exhibiting at the Royal Academy in 1905.

In 1916 he moved to Spain for his health, leaving behind his first wife and two children. He never returned, finding the Spanish landscape and people an endless source of inspiration. He travelled around the country finally settling in Granada in his beloved Andalusia, setting up his studio close to the gypsy quarter.

In the first and second decade of the 20th Century Apperley painted a series of sophisticated and sensual classical narrative pictures inspired by the Old Masters, particularly Titian and Veronese. With this in mind, strong parallels can be drawn between Titian's Venus of Urbino and this present portrait of Apperley's second wife, Enriqueta Contreras. Although the composition is reversed, both women recline across a day bed, their gaze directed at the viewer. Each holds a rose, and has her legs identically folded, with a drawn curtain revealing classical architecture and a sky at twilight beyond. Apperley's scene is made even more evocative with the sensual reference to fertility in the pomegranate tree. A final note of exoticism and mystery is struck in the reddish hues that bathe the 14th Century Moorish palace of the Alhambra as it glows in the evening light.