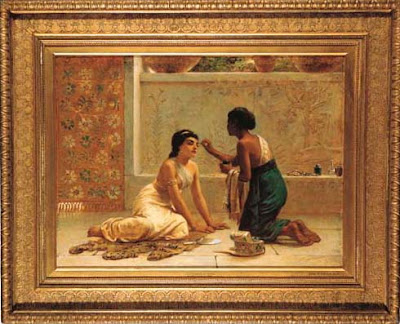 An Ancient Custom was painted at the height of Long's career. The previous year The Babylonian Marriage Market (fig. 3) had been exhibited at the Royal Academy to rapturous reviews. Reputedly commissioned by the MP Edward Hermon for the substantial sum of £1,700, it took its subject from George C. Swayne's The History of Herodotus:

Herodotus records one of their customs, which, whether in jest or earnest, he declares to be the wisest he ever heard of. This was their wife-auction, by which they managed to find husbands for all their young women. The greatest beauty was put up first, and knocked down to the highest bidder; then the next in order of comeliness - and so on to the damsel who was equidistant between beauty and plainness, who was given away gratis. Then the least plain was put up, and knocked down to the gallant who would marry her for the smallest consideration - and so on till even the plainest was got rid of to some cynical worthy, who decidedly preferred lucre to looks. By transferring to the scale of the ill favoured the prices paid for the fair, beauty was made to endow ugliness, and the rich man's taste was the poor man's gain.

In order to ensure the authenticity of his depiction, Long made an extensive tour of Egypt and Syria in 1874-5, which he supplemented by a study of the exhibits in the British Museum. His aim was to facilitate a harmonious connection between art and archeology, and according to Ruskin's review of the work, by the standards of the day he succeeded. Ruskin thought it: 'A painting of great merit, and well deserving purchase by the Anthropological Society. For the varieties of character in the heads are rendered with extreme subtlety: while, as a mere piece of painting, the work is remarkable, in the modern school, for its absence of affectation: there is no insolently indulged indolence nor vulgarly asserted dexterity - the painting is good throughout and unobtrusively powerful'. The Art Journal endorsed Ruskin's praise: 'The picture, in our eyes, is historic in the best sense, and does honour to the British School'.

In 1882 The Babylonian Marriage Market achieved further notoriety when it was sold at Christie's for £6,6235, an auction record for a work by a living artist and a feat which remained unsurpassed for the next decade. It was bought by the distinguished collector Thomas Holloway, and is now in the collection of the Royal Holloway College, Egham, Surrey.

Such was the success of this picture that it not surprisingly encouraged Long to produce more paintings in the same vein. The prime version of An Ancient Custom was painted in 1876 and exhibited at the Royal Academy in 1877. Again, on account of its success, Long painted a second slightly smaller version, the present lot, later that year. Long must have been pleased with the composition, for, as he told the Times on 7 June 1879, that 'with the exception of one other picture entitled "An Ancient Custom"...I have not made any duplicates of my pictures, or any portions of them, for some years past.' The prime version was sold at Christie's New York, 1 May 2000, lot 45, for $776,000, the current world auction record for the artist.

Reviews of An Ancient Custom were eclipsed by those for another vast work, An Egyptian Feast, measuring 74½ x 150 in., which Long exhibited at the Academy in the same year. Of that picture the Art Journal wrote: 'Here is the great outcome of a teeming imagination, constrained and guided by a ripe scholarship, a trained judgement, and projected on the canvas with a hand of the rarest cunning...The merits of Mr Long's work lie in his archeological knowledge, as already hinted; also in the wonderful variety of expressive action and detail, which, however, he keeps wisely subservient to the general effect, and thus maintains breadth and unity. Moreover, caeteris paribus, the warmth and wealth of his colouring give Mr. Long an advantage over every other workman in a similar field, whether that field be Classical or Oriental.'

The present painting depicts a Nubian girl on her knees painting the eyebrows of her mistress. A tapestry and a Babylonian relief stands behind them, while the costume, jewellery and perfume bottles that stand in the foreground and background are painted with accuracy. According to Long, the painting was 'the original study' for Esther on a smaller scale, and afterwards completed for the purpose of engraving'. Two of Long's paintings exhibited at the Royal Academy of 1879 were subjects from the book of Esther. Queen Esther (fig. 2) is now in the National Gallery of Victoria, Melbourne, Australia, while Vashti is in the Bob Jones University and Gallery, Greenville, USA.

Long's career falls into two distinct halves. Between 1857 and 1873 he travelled annually to Spain, encouraged by the example of John 'Spanish' Phillip (1817-1867), and produced pictures such as The Suppliants: Expulsion of the Gypsies from Spain of 1872, now in the Royal Holloway College. However from 1874 he turned to the oriental, classical and biblical scenes that secured his fortune, and enabled him to build tow magnificent studio house, designed by the Arts and Crafts architect Richard Norman Shaw. The largest concentration of these later works can now be seen in the Russell Cotes Museum and Art Gallery, Bournemouth.

We are grateful to Mark Bills, for his help in preparing this entry.
at 6:00 AM

Wonderful article - I will share it with my artist friends.