Edwin Long - Gibraltar; from the series 'Daughters of Our Empire' 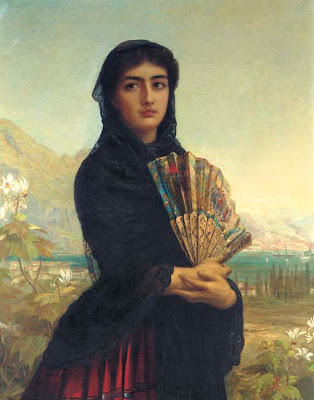 This picture was one of a series of twenty commissioned by the London dealers Agnew's to celebrate the Royal Jubilee of Queen Victoria. Various 'Daughters of Empire' were depicted in their national costumes. These included Aden; Bethlehem; India; Wales; Australia; Canada; Cyprus (Ancient: Love's Messenger, and Modern); Egypt; England: the Parson's Daughter, The Violet, The Rose (a portrait of Princess May of Teck, later Queen Mary, wife of King George V), The Primrose, The Little Sister of the Poor; Ireland; Jamaica; Malta; Scotland and Trinidad.
at 6:00 AM