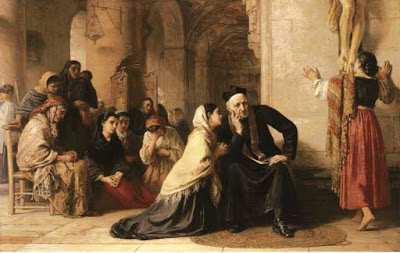 A woman whispers her confession to a priest who listens with wrinkled brow and a wry expression whilst another girl kisses the feet of a statue of Jesus and a group of women await their turn, praying and clutching their rosary beads. This is a superb example of Long's work from his Spanish period and bears many similarities to The Catechism (1867). However, it is closest in theme and composition to Good Advice (1871) in which Long portrays the same central characters in a similarly religious genre scene. The young girl, her anxious mother urging her on, presents a letter to the priest and listens to his advice, coyly turning her head away. Mark Bills has suggested that Good Advice, although smaller (38 x 51¾ in.) forms the second part of the narrative begun in our work. A study exists painted the same year that does not show the confession box and the clergyman to the left of the picture and which were conceived of later for the main work. (Madame Tussauds; by descent to Mr Clive Blount).

Long's Spanish interest stems back to 1857 when he attended classes given by John Phillip in his studio at 39 Gloucester Road. Phillip introduced Long to the Spanish painters that had influenced him and they travelled extensively throughout Spain together. This period from 1857 until 1874 when he went to Egypt was Long's most prolific period during which the influence of Phillip and Murillo are present throughout his work. The individual character of Long's work began to form and can be seen most obviously in his works on a larger scale. Although his grander history subjects were clearly influenced by Phillip, it was his fascination with religious ritual and devotion which distinguished Long from his mentor. The characteristic elements of his genre pieces from his Spanish period include priests, lovers, fruit-sellers - all revealing a diversity of colourful Spanish costume. Religious devotion of young women was a frequent subject in his work in such paintings as At Mass (c. 1860) and A Young Peasant at her Devotions (1870). Perhaps his first wholly successful painting on an ambitious scale is A Question of Propriety was exhibited in 1870 the year before our work and received favourable reviews in the journals. In 1871 Long visited Spain and whilst painting An Easter Vigil, he also undertook The Supplicants: Expulsion of the Gypsies from Spain which achieved critical acclaim the following year at the Royal Academy and effectively severed his stylistic ties with Phillip.
at 6:00 AM

With the exception of the Whistler one at the end (that photo is very touching),
I'm more a fan of the originals and don't think they need to be reinterpreted.