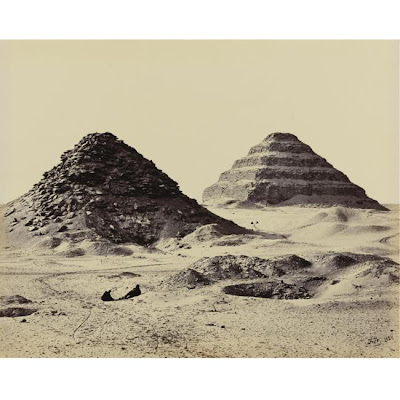 'THE PYRAMIDS OF SAKKÁRAH, FROM THE NORTH EAST'

plate 7 from Frith's series, Egypt, Sinai and Jerusalem: A Series of Twenty Photographic Views (William MacKenzie, London, circa 1860), mammoth-plate albumen print, signed and dated '1858' by the photographer in the negative, on the original oblong folio mount, the plate title, date of 1857, and photographer's credit in letterpress on the mount, 1857-58; accompanied by the original leaf of letterpress text by Reginald Stuart Poole and Sophia Poole

Dating from Frith's second trip to Egypt, the mammoth-plate albumen print offered here is one of a suite of photographs from Frith's Egypt, Sinai and Jerusalem: A Series of Twenty Photographic Views. Taken at Saqqara, part of an ancient necropolis, this photograph shows the oldest of Egypt's pyramids, the 3rd Dynasty Step Pyramid of Pharaoh Djoser and, in the foreground, an unfinished pyramid begun by Djoser. The random skulls in the foreground bear testament to the site's history as a final resting place for ancient Egyptian Pharaohs.

Published by William Mackenzie in 1860, the bound volume of Frith's Egypt, Sinai and Jerusalem: A Series of Twenty Photographic Views, was advertised in its day as 'the largest book with the biggest, unenlarged prints ever published' (quoted in Francis Frith in Egypt and Palestine: A Victorian Photographer Abroad, p. 79). The monumental scale of Frith's folio, from which the present print and letterpress text were taken, made it unique for its time and almost unparalleled in the history of photography. A departure from his earlier multi-volume publication on the Middle East, Egypt, Sinai and Jerusalem marked the first time Frith included text by experts in the field. Each photo was issued with a letterpress description by the mother-and-son team of Sophia Poole and Reginald Stuart Poole. Both had lived in Cairo and were familiar with Egyptian history and culture; the latter was employed at the British Museum in the Antiquities Department and trained with one of the leading Egyptologists of the day.

A man of means by his early thirties, Frith made his initial trip to Egypt in 1856 as a gentleman amateur. While he was not the first to photograph there, he was the first to bring mammoth-plate collodion photography to the region. To use his mammoth-plate camera on site, Frith had a specially-constructed covered carriage that housed the camera and plates. The carriage also served as a makeshift darkroom, and its tracks are visible in the photograph included here. The use of collodion on glass posed tremendous problems in the dust and heat of the desert. The emulsion had to be applied to the glass plates in an ether-filled tent, at temperatures reaching 114˚. Frith described the experience in his Egypt and Palestine as follows: 'Now in a smothering little tent, with my collodion fizzing—boiling up all over the glass the instant that it touched—and, again, pushing my hand backwards, upon my hands and knees, into a damp, slimy rock-tomb to manipulate—it is truly marvelous that the results should be presentab
at 5:00 PM

I am of course besotted with Israel, Egypt and Jordan, and go to that part of the world as often as I can. But I go in comfort and safety. Frith (and his soul mates) went to remote, dangerous and very uncomfortable places, to get their images. Amazing! and heroic!

I thought "Francis Frith in Egypt and Palestine: A Victorian Photographer Abroad" was great because it gave Frith a useful historical context.

I've never been but that book sounds good. There is a new theory that humankind came out of the Middle East rather than Africa.