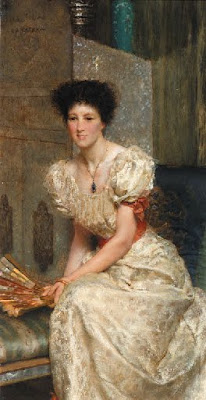 The sitter was the wife of the artist Charles William Wyllie (1853-1923). Like his better-known elder brother, William Lionel Wyllie (1851-1931), Charles specialised in marine and coastal subjects, although he was not quite so devoted to them as his sibling, varying them with classical and vaguely symbolist themes. He was never, like William, a Royal Academician, but he showed regularly at the Academy from 1872, as well as at Suffolk Street, the Grosvenor Gallery, the New Gallery, and elsewhere. One of his pictures, Digging for Bait (Tate Gallery), was bought for the Chantrey Bequest when he was only twenty-four. His brother did not receive such an honour until he was thirty-two.

Charlotte Wyllie, too, was an artist. Born Charlotte Major, she did not support the Royal Academy, but she showed regularly at the Grosvenor Gallery from 1878, its second year, to 1886. She also exhibited occasionally at Manchester and Liverpool, and she sent one picture, The Sin Offering, to the opening exhibition at the New Gallery, the Grosvenor's successor, in 1888. After this, although her husband continued to be represented, her name disappears from the Gallery's catalogues, and it is possible that she gave up painting. The titles of her pictures alone tell us that she attempted portraits, genre scenes and symbolist subjects, and this is borne out by the two examples which are all one finds in her Witt Library file. One is a mysterious half-length figure, crowned and veiled, the other a likeness of a little girl with a dog.

The fact that the child is dressed in the Dutch style is probably significant. The influence of Dutch seventeenth-century painting was strong both on Alma-Tadema himself and, more overtly, on his wife Laura, whose paintings freely acknowledge this source in style and iconography. Mrs Wyllie's modest little picture almost certainly echoes this tendency, for it is clear that the Wyllies and the Alma-Tademas were on close terms. In the 1880s and the 1890s the Wyllies are recorded either living or working at three addresses in St John's Wood - 11 Melina Place, 8 Melina Road, and 38 Abercorn Place - all of which were close to the Alma-Tademas at 17 Grove End Road. Charles Wyllie, moreover, was one of the forty-five artists who contributed panels to the decoration of the entrance hall at their friends' abode (fig. 1). The house had once been occupied by J.J.J. Tissot, but in 1884, two years after the grief-stricken artist had returned to Paris following the death of his mistress, Mrs Newton, it was taken over by Alma-Tadema and turned into the most spectacular studio house of the day. Visitors were stunned by the lavish decor and the eclectic mixture of decorative syles, ranging from Pompeian to a seventeenth-century Dutch mode which reflected Alma-Tadema's national origins and the artistic allegiance of both husband and wife. The panels in the entrance hall, each 31 inches in height and representing the characteristic styles of their creators, were one of the most notable features, figuring prominently in accounts of the astonishing show-place. The panels were removed when the house was sold up in June 1913, a year after Alma-Tadema's death, but Wyllie's re-appeared at Sotheby's Belgravia on 5 November 1974, lot 54.

Alma-Tadema's portrait of Charlotte Wyllie, which we know was given to her husband by the artist, was almost certainly traded for Wyllie's contribution to the Hall of Panels. This is true of a number of Alma-Tadema's more modest works from the late 1880s. Leighton, for instance, contributed a version of his famous Bath of Psyche (1890; Tate Gallery), and received in return Alma-Tadema's painting In the Corner of my Studio (1893; Swanson, no. 356). But most of the pictures offered as a quid pro quo took the form of portraits. As Professor Swanson observes in his catalogue raisonn, Alma-Tadema rather specialised in painting the womenfolk of distinguished fellow artists. In addition to his own wife, Laura, who sat to him on several occasions, his sitters included the wives or daughters of the painters John MacWhirter, Henry Stacy Marks, Marcus Stone, Frank D. Millet, and Moseley Baker; the sculptors Onslow Ford and A-J. Dalou, who, like Alma-Tadema himself, came to London in 1870 as a refugee from the Franco-Prussian War; and F.G. Stephens, who had been a member of the Pre-Raphaelite Brotherhood before he abandoned his brush for art criticism. At least three of these portraits - those of MacWhirter's daughter (1889; Swanson, no. 333) Agnes Marks, the daughter of Henry Stacy Marks (1890; Swanson, no. 342), and the wife of Marcus Stone (1895; Swanson, no. 372) - were in 'payment' for contributions to the Hall of Panels, while that of Clothilde Enid Ford, Onslow Ford's daughter (1896; Swanson, no. 376), was exchanged for a cast of her father's bust of Alma-Tadema, the sculptor's R.A. diploma work.

Mrs Wyllie is clearly shown in Alma-Tadema's studio. The famous Mexican onyx windows are not visible, as they often are in pictures with this setting, including the portrait of Maurice Sons playing the violin (1896) which was sold at Christie's in London on 11 June 1993, lot 120; but there are hints of marble walls and choice objects - an oriental ceramic vase, perhaps a piece of Renaissance metal work; and the sitter is posed on one of the studio seats which frequently appear in the artist's paintings, and one of which survives in the Victoria and Albert Museum (see Sir Lawrence Alma-Tadema, exh. Van Gogh Museum, Amsterdam, and Walker Art Gallery, Liverpool, 1997, cat. no. 87). The seats were designed by Alma-Tadema himself, one side being Egyptian in style, the other Pompeian; and they were probably made by Johnstone, Norman & Co., a London firm he had employed in the mid 1880s to make the suite of furniture which he designed for the music room of the New York financier Henry Marquand. The grand piano which was the centrepiece of this ensemble was sold by Christie's in London on 7 November 1997, lot 860.

The picture was generally well received when it appeared at the New Gallery in 1893. Frederick Wedmore was a little grudging in the Magazine of Art, finding it only 'agreeable', but others were enthusiastic. F.G. Stephens, in a review in the Athanaeum, first noticed the artist's other exhibit that year, Unconscious Rivals (Bristol City Art Gallery; Swanson, no. 358). He then continued: 'The same painter contributes a charming miniature at nearly whole length of Mrs Charles Wyllie in evening dress, a cream white brocade, seated in a room the decorations of which suit her fine flesh tints, her amber-coloured fan and sash. The attitude and expression of this delightful figure are as animated as they are graceful. It is a gift to Mr C. Wyllie, the distinguished landscape painter'.

The critic on the Times also mentioned the picture's diminutive size, but felt that it transcended any limitations this might have imposed. 'Very perfect, too, is the small "Portrait of Mrs Charles Wyllie", in scale scarcely removed from a miniature, but painted with a strength and breadth to which the miniaturist cannot attain.' The writer also noted that the picture was hung as a 'pendant to...a charming little interior by Mrs Tadema.' This must have been Laura's only contribution that year, a work entitled Many Stiches, many Thoughts (no. 10 in the catalogue). It says much about our picture that it could be paired with a genre subject, no doubt one in the artist's usual 'Dutch' idiom. Alma-Tadema's portraits often have a genre-like quality of their own, and that of Mrs Wyllie, in which the sitter seems to be engaged in conversation, or perhaps about to rise and greet a visitor, is no exception. F.G. Stephens's observation that 'the attitude and expression...are as animated as they are graceful' sums it up perfectly.
at 6:00 AM

A lovely portrait and of special interest and some confusion to me as to which Charles Wyllie she was married. I am a member of Herne & Broomfield Local History Group (nr Canterbury) and have been researching Charlotte Wylie (sic) one of 3 daughters of Charles and Ester Major of Herne for several years. Charlotte never lived in Herne as her parents has retired to Herne from London when she and other siblings were adults. They were friends of the wealthy art benefactors, the Greek Ionides family. Charlotte married a London stockbroker - Charles John Wylie and they lived at Earl`s Terrace, Kensington. I have never seen his name connected with art. He died in 1900, 26 years before Charles William Wyllie the artist, and is buried in Herne churchyard.
Charlotte was an artist and her career fits dates and facts on this website and others, but for some reason she painted under the name `Charlotte Major Wyllie`. She was a friend of George Frederick Watts and Aglaia Ionides, and part of The Holland Park Circle. She gave up painting or at least exhibiting when her mother, and brother-in-law Matthew White Ridley died in the same year. The latter was a well-known artist in his day and friend of Whistler and Fantin-Latour.
Charlotte certainly knew Alma-Tadema and it is possible that a picture by him painted in the Surrey countryside at Caterham could have been made on a visit to Charlotte`s sister Dorothy, Ridley`s widow. Dorothy had remarried and moved to Caterham from London.
Any further information would be gratefully received.

Sorry I read this after your email. All I know is the write up from Christie's. She sounds most interesting though.

there is a stained glass window in memory of charlotte whylie, artist, in st johns church, caterham. it is of a veiled lady (death?) and 2 side panels of i think ladies, and is very beautiful and i believe a copy of one of charlotte's paintings, there are also fab windows by james powell.

Hi, excuse the belated comment, but I just recently did some research on this portrait ... turns out that this woman is not Charlotte Wylie, the painter, who was not (as everyone understandably assumes) married to Charles William Wyllie, but rather to a grain dealer named Charles John Wylie. So who is Mrs. Wyllie? Well, her maiden name was Marion Alberta Herbert Noyes, & she and Charles W. married in 1882 ... and that's pretty much all I've found out about her so far. I don't even know the names of her parents. But the 1881 census records an "Alberta E. H. Noyes," 17 years old, living with the painter Charles Sillem Lidderdale, as his goddaughter. Now, I haven't yet found mention of any connection between Charles W. & his painter father, on the one hand, and Lidderdale on the other hand; still, it's hardly a far stretch to think that Charles W. may have been at Lidderdale's house sometimes, and thereby met Alberta, & married her if she's actually the same person as Marion Alberta. More research needed! (Lidderdale family letters, maybe?)