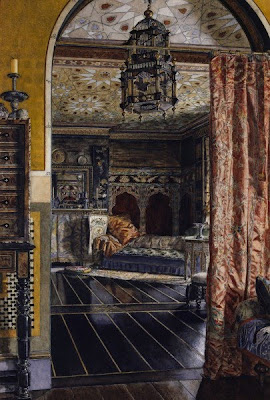 
This highly intricate watercolour shows one of a suite of ornate drawing rooms in the artist's home, Townshend House in Regent's Park, London. This was the studio-house of the Dutch painter Sir Lawrence Alma-Tadema (1836-1912) and his family, in which he created a set of extravagant and eclectic interiors in a variety of styles ranging from traditional Dutch to Egyptian, Ancient Greek, Pompeiian, Byzantine and Japanese. The rooms and furnishings not only served as props for Sir Lawrence's paintings they also provided inspiration for his second wife Laura Epps and his daughter Anna who were also artists.

Anna Alma-Tadema painted this watercolour while still a teenager, demonstrating a precocious talent for close observation and jewel-like colouring. In the past, this work has been confused with the watercolour that she exhibited at the Royal Academy in 1885 entitled 'The Gold Room'. However, given the date inscribed by the artist in tiny letters on the bottom left, "10/9/85", this would not have been possible as the Academy exhibition took place earlier in the year. It seems certain that this is instead the work entitled simply 'The Drawing Room' that Anna exhibited at the Grosvenor Gallery in 1886. A contemporary reviewer thought the work 'astonishing…for its mastery of detail, elaborate minuteness of work and glow of colour'.

In 1886 the Alma-Tademas moved to Grove End Road in the popular artistic enclave of St. John's Wood. This is one of a series of watercolours that Anna Alma-Tadema painted of interiors in Townshend House, which were possibly intended to record the aesthetic ambience her father had created before the rooms were dismantled. The view looks through an archway from the 'Gold Room' into the 'Columned Drawing Room', though the columns themselves are hidden. In 1882 the room was described in the Magazine of Art as having a 'ceiling…supported by Ionic pillars...while great cushions of Oriental stuffs are heaped upon the chairs..A portion of this room, or rather compartment - for there are no doors between the drawing-rooms, but only archways and curtains - is hung with crimson Persian appliqué work in velvet of some considerable antiquity, once the ornament of a palace in Venice when she "held the gorgeous East in fee"'.