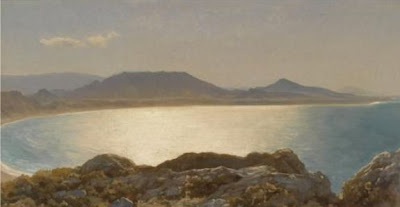 CATALOGUE NOTE
This striking seascape was painted during Leighton's visit to the Greek island of Rhodes in the autumn of 1867. As Christopher Newall pointed out in his catalogue entry when the picture was exhibited in the Leighton exhibition at the Royal Academy in 1996, the clear weather suggests that it was painted early in the artist's stay, as the weather is known to have deteriorated. The view of the bay illuminated by sunlight seen from a high cliff-top vantage was almost certainly painted on the east coast of the island looking southwards, perhaps close to the island of Monolithos.

Leighton painted a series of these small plein air oil sketches throughout his career, while on holidays and some of the sketches were used in composing the background for pictures such as Greek Girls Playing at Ball (Dick Institute, Kilmarnock), Winding the Skein (Art Gallery of New South Wales, Sydney, Australia) and Perseus on Pegasus Hastening to the Rescue of Andromeda (Leicester City Museum) in which bays are seen from above. The present picture, with the gleaming golden light on azure water, recalls the seascape in the background of the
celebrated Flaming June painted almost thirty years later (Museo de Arte de Ponce, Puerto Rico)
at 6:00 AM