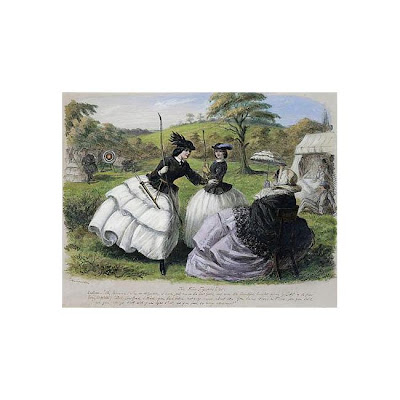 [constance: 'oh, mamma! i'm so delighted, i have just made the best gold, and won the beautiful bracelet given by captain rifles'
lucy (disappointed): 'well, constance, i think you had better not say much about it. you know it was a fluke, for you told me you always shot with your eyes shut, as you feel so very nervous!']
signed l.l.: John Leech; inscribed along the lower edge
oil on paper with pencil
51 by 65 cm., 20 by 25 1/2 in.

Leech was born in Southwark in 1817. He had a natural talent as a draughtsman even at Charterhouse where he was a contemporary of William Makepeace Thackeray. In the early 1830's, drawing was just a pastime as he studied to be a doctor but his father's financial problems put an end to advancement in that profession.

On 17th July 1841 Charles Lemon published the first edition of Punch, or the London Charivari, and commissioned drawings from Leech for the fourth issue in August of that year. Thereafter Leech became its most frequent contibutor, supplying the magazine with a seemingly endless stream of drawings for the next twenty years. Leech established Mr.Punch as an amusing metropolitan commentator, a role which was enlarged after 1847 when Mr.Punch discovered 'The Country'. Leech's contributions to the magazine were some of its finest and funniest drawings and helped make the magazine a household name. In 1843 the magazine was joined by his friend, the writer W.M.Thackeray, who famously wrote in The Quarterly Review in 1854: 'Fancy a number of Punch without Mr Leech's pictures! What would you give for it? The learned gentleman who write the work must feel that. Without him is were all well left alone'.

The technique employed by Leech to create his famous 'Oil Sketches' was extraordinary. The original wood blocks of the Punch illustrations were printed onto India rubber. This in turn was stretched. A perfect copy of the enlarged sketch was transfered to a lithographic stone and then printed on a large sheet of prepared canvas. The result was an impression of the original cartoon eight times his original size. The printed lines were then partly disolved in turpentine as Leech coloured the paintings with oil paint. Finally the sketches were varnished.

A very lovely and witty sketch. Love the dialogue.
The technique used by Leech is amazing and painstaking to say the least.
Thank you for posting
Marta

The dialogue reminds me of a Punch cartoon. Delightful painting.

I have one of the pieces.... the Fair toxophilites.... by John leech. I would like more info on the same .... e mail Diane Fitzgerald ... fitzhaven2005@hotmail.com