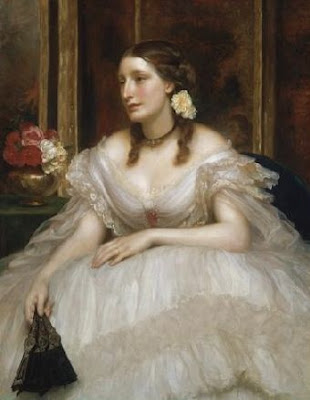 Leighton's elegant portrait of the Hon. Augusta Frederica Annie Magniac was thought to have been destroyed by fire in 1939. Fortunately it survived within the Magniac family and is offered here at auction for the first time in its history. She is depicted in all of her finery as a society hostess, dressed in a gown of ivory lace, holding a closed fan and wearing a large ruby brooch to harmonise with the red of some of the peonies arranged in a bronze vase on the table beside her. There are vague echoes of the portrait of Madame Moitessier of 1856 painted by Ingres (National Gallery, London) who Leighton had met in Paris only five years earlier. Painted in 1863 the picture is an early example of Leighton's portraiture and painted around the time that he began work on one of his masterpieces Dante in Exile (Lord Lloyd Webber). It predated the building by George Aitchison of Leighton's famous studio house at Holland Park and was painted at 2 Orme Square, a studio found for him by a painter friend Alfred Elmore. Leighton was socially ambitious and befriended several influential families at this time, including the Cowpers at Panshanger, the Hoares at Stourhead and the Sartoris family at Westbury
House in Hampshire, for all of whom he painted portraits.

The Hon. Augusta Frederica Annie Wilson (died 24 February 1903) was one of the six
daughters of John Wilson, 1st Lord Castletown. On the 30 January 1851 she married
Lieutenant Colonel Thomas Vesey Dawson, son of the 2nd Baron Cremorne, but sadly
their marriage was brief as he died less than four years later on 5 November 1854 at
the Battle of Inkerman in the service of the Coldstream Guards in the Crimean war. In
1857 Augusta married Charles Magniac (1827-1891), the son of Hollingworth Magniac
of Colworth, Bedfordshire. The Magniac family were of Huguenot heritage who had
settled in England and by the early nineteenth century had become wealthy traders with the Far East rivalling the monopoly of the East India Company. Charles was a partner in Matheson and Company of Lombard Street but he also had political aspirations. In 1868 he became Liberal M.P. for St. Ives in Cornwall, a seat he held until 1874. In 1882 he was one of the two M.P.s representing Bedford and at the time of his death was the Chairman of Bedfordshire County Council, J.P. and Deputy Lieutenant for the county.

The circumstances of how Leighton came to paint Augusta are not known. Leighton
was at heart a shy man who hesitated to intrude into the personalities of people who he did not know well. The best of his portraits were therefore of men and women who he was fond of and with whom he felt at ease. Among his female sitters, most were rather younger than him, and it seems were individuals of marked temperament. Mrs James Guthrie is a representative figure. The portrait that he painted of her in 1864-5 and which is now in the Yale Centre for British Art (FIG 1. New Haven, Connecticut) speaks of a relationship of affection and mutual respect between painter and sitter. Like Ellinor Guthrie, Augusta Magniac was the wife of a City financier and it seems unlikely that the Magniacs or the Guthries were part of Leighton's social circle as they shared few interests. It has been suggested that it was Mrs Guthrie rather than her husband who persuaded Leighton to paint her and it is likely that the same is true of Mrs Magniac's portrait. It seems that the artist found Augusta personally appealing and sympathetic, as a warmth of personality can be felt in the portrait Leighton painted of her. He was not a prolific portraitist, and seems always to have been on guard against allowing his professional practice to sink to that of a portrait manufactory (as certainly happened to a number of his contemporaries). He knew very well that there was an over-supply of portraits to the summer exhibitions in London- both because people in society wanted to see paintings of themselves and of their families exhibited in public displays, and because the artists themselves were eager to show off their latest works in the hope of receiving further and even more munificent commissions. It is because Leighton was careful not to paint too many that he was able to bring a fresh approach to each commission, creating over the years a series of highly distinctive, beautifully wrought and imaginative depictions of some of the greatest people of the age.

Leighton's portrait of Mrs Guthrie was painted a year after that of Mrs Magniac and both carry forward the search for a new style of portraiture which lent itself to the
representation of aristocratic figures but combined with a quality of psychological
immediacy and likeness which allows the sitters to be seen as living individuals. In this sense Leighton may be seen as the inventor of a new and modern style of portrait
painting, which was to be carried forward and exploited by the two great American
artists whose works have come to be seen as expressing the elegance of the Belle
Epoque, John Singer Sargent and James Jebusa Shannon.

A black and white chalk drawing for this portrait is in the collection of Leighton House. 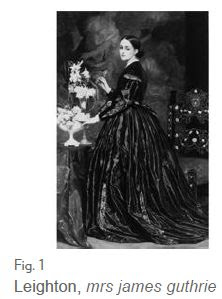