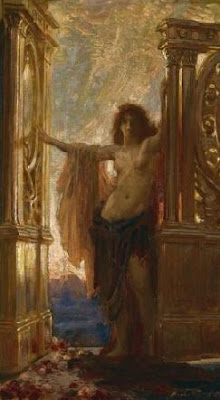 The Gates of Dawn (Draper's Hall, London) exhibited to great acclaim at the Royal Academy in 1900, depicts the Roman goddess Aurora, the personification of the dawn mentioned in Ovid's Metamorphoses thus '... far in the crimsoning east wakeful Dawn threw wide the shining doors of her rose-filled chamber.' The painting for which this
is a recently rediscovered sketch, has been described as '...one of Draper's most monumental figures... inviting and alluring, magnificently beautiful and proud.' (Simon Toll, Herbert Draper 1863-1920, A Life Study, 2002, p.101)


Although seven chalk drawings are recorded as being made for various details in The Gates of Dawn, the present picture would have been the last sketch, made in oils and showing the entire composition. The purpose of the sketch was to finalise the colour scheme, a practice learnt from Draper's mentor Leighton. Although the picture was
made as a study in preparation for a larger picture it has the qualities of an independent work, painted with vigour and confidence.
at 5:45 AM