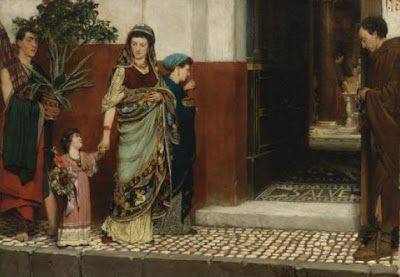 Commissioned by Ernest Gambart, London in 1865

At the doorway of a wealthy household, a young mother dressed in an elaborately embroidered robe stops to listen to the chatter of her daughter. The little girl clutches the bejewelled fingers of her mother while in her other hand she holds a floral garland and votive figure bought in the market for the family's shrine. Behind the child, the woman and her companion walks a barefoot slave carrying a potted cactus and lemon-tree, garments and a folded parasol other purchases from the market from which the picture takes its title. A doorman bows his head in suppliant
greeting as the women prepare to enter the doorway that he has unlocked with his iron keys. In the doorway is a mosaic bearing the work SALVE (a Latin greeting) whilst beyond this a second mosaic depicting a ferocious guarddog and the word CAVE CANEN (beware of the dog). Through the doorway two gentlemen are in conversation in a
sunlit atrium awaiting the return of their wives from their shopping trip. Although Tadema set his genre paintings in classical antiquity, he liked to depict subjects that were relevant to modern day.

Painted in Brussels in November 1865, Returning Home from Market is among Tadema's earliest pictures of Roman life and the first of a series of historical paintings of people on thresholds, of which Entering Church in the Fourteenth Century of 1865 is the medieval counterpart. Entrance to a Roman Theatre of 1866 probably depicts the
same mother and child again holding hands whilst A Roman Scribe Writing Dispatches and A Chat both painted in 1865 probably depict the same model that posed for the figure with keys in the present work. Over his entire career Tadema remained interested in the contrasts of interior and exterior spaces, of thresholds, arrivals and departures.

His interior scenes offer glimpses of rooms and gardens beyond, suggesting space and recession but also the contrast of the public and the private. In Returning Home from Market the two spaces are delineated by the doorstep which divides the cobbled public street with the more refined and private marble interior.

The architectural details found in Returning Home from Market were accurate depictions of elements seen in the new excavations of Pompeii and Herculaneum which Tadema had visited on his honeymoon in 1863. The mosaics are based upon existing examples at Pompeii and the red painted walls, cobbled pavements and deep stone
pavement-edges were certainly observed by Tadema at the archaeological site. The visit to Pompeii had a dramatic effect upon Tadema's work and began a forty year fascination with depicting Roman scenes of domestic life. The marble table with legs carved with winged lions also appeared in Tadema's most elaborate of the first Roman
pictures Catullus at Lesbia's (Sotheby's, Belgravia, 6 November 1973, lot 3).
The critic for the Illustrated London News wrote of this picture; 'No artist has secured more antiquarian verisimilitude in his works than M. Alma-Tadema. Drawing aside the veil from the past, he enables us, as it were to witness apparently the most vivid and minutely faithful reflections of incidents of domestic life in long bygone forms of civilization.' (Illustrated London News, 30 June 1866, p.627)
at 6:00 AM