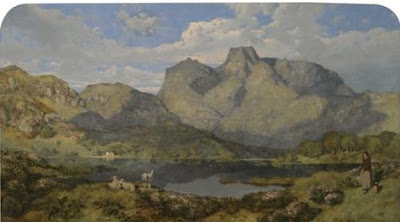 The present Lakeland view by W.J. Blacklock among the last works from his short career and exhibited at the Royal Academy in 1855 takes its vantage point from the western shore of Esthwaite Water, and looks north westwards towards the Langdale Fells. Esthwaite is a small and irregularly shaped body of water between
Windermere and Coniston Water, much loved by the young William Wordsworth and to this day tranquil and secluded. The Langdale Fells, with Langdale Pikes at its centre (the chisel-headed mountain which forms the highest peak of the painting's horizon) are among the grandest and most sublime examples of mountain scenery to
be found in the British Isles.

The artist has lovingly depicted the familiar features of the English Lake District: a white-washed cottage on the far side of the lake; woodland on the lower ground, and exposed rock and scree above; a vegetation of heather, mushrooms and bog cotton. In the foreground stand a group of sheep, and on the right side and observing the
larger scene a young woman who has momentarily placed beside her an earthenware milk pitcher. This figure may perhaps be identified as the painter's paramour (who is variously referred to as Bessy and Martha) and to whom he wrote and dedicated drawings until the end of his life.

The atmospheric effect of the painting is beautifully observed. The landscape is partly suffused in shadow but in other areas brightly lit; while the sky is a magical pattern of pearly broken clouds and clear blue. Blacklock's
particular mastery in the treatment of mountain landscapes depended in great part on his skill and understanding of the constantly fluctuating quality of light, and here especially the scale and structure of the distant ranges are given volumetric expression by the graduated fall of light. Thus the mountain range seems both massive and distant, but at the same times almost tangible and lending itself to close and detailed scrutiny. Harriet Martineau, in her guide to the Lakes published in 1855, commented on a similar optical ambiguity whereby 'the Langdale Pikes, and their surrounding mountains seem, in some states of the atmosphere, to approach and overshadow the waters [of Windermere]; and in others to retire, and shroud themselves in cloud land' (A Complete Guide to the English Lakes, Windermere, 1855, p. 15). Esthwaite Lake was painted in response to a commission from William (later Sir William, and later still Lord)Armstrong, the Newcastle industrialist and arms manufacturer and whose house Cragside near Rothbury was built by the architect Richard Norman Shaw. Some glimpses of the progress and completion of this work and a
companion piece also showing the Langdale Pikes (now known as Landscape with a Fisherman is in a private collection) and which had been commissioned by the Gateshead collector of Pre-Raphaelite art, James Leathart, are given in Blacklock's correspondence with Leathart (now held as part of the Leathart Papers, University of British Columbia). In a letter of 2 June 1854 Blacklock spoke of 'two pictures just finished one the same lake as I am going to do for Mr Armstrong but a different view nearer the Langdale Pikes'. Another letter from the autumn of the same
year tells how Blacklock was suffering from an inflamed eye which made it impossible for him to work, with a consequent hold up on commissions. However, by 9 February 1855, he had made sufficient progress to be able to say to Leathart: 'I am working on your friend Mr Armstrong's picture with much pleasure and feel very thankful and
grateful for it was at one time doubtful that I should ever again have been able to return to the Art'. In March 1855 Blacklock asked Leathart to request permission from Armstrong that the present work, then 'nearly finished', should be sent directly to the Royal Academy, a favour that was apparently granted. Finally, on 17 September 1855, and writing from Allonby on the Cumberland coast, the artist could tell Leathart that 'In passing through Carlisle on Saturday to the seaside I had your picture and Mr Armstrong's packed and ready to start to Newcastle and hope
that you have by this time received them'. He went on to say: 'I have painted them as well as I could neither sparing time nor care in working on them'.

Blacklock's health was by this time deteriorating, it seems because of a syphilitic infection. Although he believed that the inflammation of his eye had been lessened by bathing in fresh water, in due course he became partially blind leading to his ceasing of work as a professional artist. Given to increasingly erratic patterns of behaviour, in November 1855 he was consigned by his family to the Crichton Royal Mental Institution in Dumfries. It was there that he died there, on 12 March 1858, aged forty-two, as a result of 'monomania of ambition and general paralysis'.
Interestingly, the Crichton hospital, under the direction of Dr William Browne, had recently introduced therapies to attempt to aid their deranged inmates including drawing, as happened also at the Royal Bethlehem Hospital for the Insane during the time that Richard Dadd was incarcerated there, so Blacklock was able intermittently to continue at least to draw to the end of his life. A number of landscape sketches made at the Crichton are reproduced in Maureen Park's book Art in Madness Dr W.A.F. Browne's Collection of Patient Art at Crichton Royal Institution, Dumfries, Dumfries, 2010.

Although hard to place in the evolving pattern of progressive landscape painting in the mid-nineteenth century, Blacklock is an important and intriguing figure who may be regarded both as a pivot between the early nineteenth century landscape school and the achievements of Romanticism, and the earnest and obsessive innovations of the
Pre-Raphaelite landscape school. Although he lived most of his life in Cumberland (he was born in London the son of a bookseller and publisher, but in 1818 the Blacklock family returned to the North where they had long established roots, living at Cumwhitton near Brampton). Blacklock lived in London from 1836, when he was twenty
years old, until 1850, and during which period he exhibited at the Royal Academy and British Institution, Liverpool, Birmingham, Norwich and Belfast generally showing north-country landscapes and gained a respected position in metropolitan artistic life, his landscape paintings being admired by Turner, David Roberts and Ruskin among others.

His eventual return to the North, at a time when he was presumably attempting to preserve his fragile state of health both mental and physical marked the commencement of an extraordinary final burst of creativity, and led to a small but precious group of landscape masterpiece paintings of which the present picture is an example. It may reasonably be speculated that Blacklock knew that time was short and that he needed to use all available energy and concentration to produce the series of works that are his memorial, and of which the present may be regarded as the consummation.

Much concerning Blacklock's career, and especially the question of his contact with other artists, is a matter of speculation. His name is largely absent from the diaries, correspondence and memoirs of the Pre-Raphaelite circle, but we do know that he was in contact with William Bell Scott, headmaster of the Government School of Design in Newcastle and who was in turn a close friend of Dante Gabriel Rossetti. It was almost certainly by Scott's introduction or recommendation that Blacklock built up a circle of patrons in the North East (Armstrong and Leathart
included). Scott and Rossetti may have hoped to meet Blacklock when they made their walking tour from Newcastle to Carlisle in June 1853. Scott who, like Rossetti was a poet as well as a painter, seems to have recorded their vain attempt to visit him in his poem 'An Artist's Birthplace', published in 1854. The verse describes the arrival of two men at the cottage home of a painter who may be recognised as Blacklock:

A fit place for an artist to be reared;
Not a great Master whose vast unshared toils,
Add to the riches of the world, rebuild
God's house, and clothe with Prophets walls and roof,
Defending cities as a pastime such
We have not! but the homelier heartier hand
That gives us English landscapes year by year.
There is his small ancestral home, so gay,
With rosery and green wicket. We last met
In London: I've heard since he had returned
Homeward less sound in health than when he reached
That athlete's theatre, well termed the grave
Of little reputations. Fresh again
Let's hope to find him.

Even more uncertain, and yet perhaps a vital factor in our understanding and appreciation of the particular character of Blacklock's painting, is his knowledge of historic schools of painting. Living in London as he did between 1836 and 1850 he would have had the opportunity to study the paintings of the nascent National Gallery
collection. It has been suggested that it was the unveiling of Old Master works long concealed under layers of discoloured varnish as a result of Charles Eastlake's cleaning programme of in the mid-1840s that prompted Blacklock to adopt brighter and more luminous colours (as he undoubtedly did in the period). A further possibility is
that he made a European tour at some point, seeing for himself works of the sixteenth and seventeenth centuries, and also perhaps making contact with working artists in France, Germany or Italy. Only the slightest indication survives of Blacklock's interest in the work of the Old Masters in a letter to Leathart of 20 September 1854 he looks forward to hearing about the works of art that the latter had seen in the course of a Continental tour. Nonetheless, broad stylistic analogies may be drawn between the landscape paintings of Blacklock and those of other British
artists who had visited Europe in their formative years. William Dyce, for example, who had visited Italy in 1825-26 and there made contact with the German Nazarene painters in Rome. Something of the clarity of light and simplicity of expression, along with a particular feeling for colour effects which are peaceful and never strident, that characterises Dyce's pure landscapes, is also infused into the less well known works of W. J. Blacklock, and may perhaps likewise be indebted to a knowledge of European schools of painting.
CSN
Sotheby's
at 6:00 AM