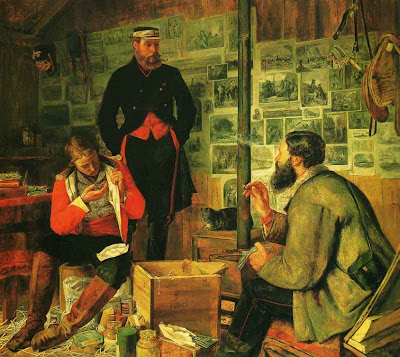 The painter John Dalbiac Luard came from a military family, but with artistic leanings. His father, John Luard, had been Lieutenant-Colonel of the 10th and 16th Lancers, and had served in the the Penisula war and at Waterloo, and later in India. John Luard compiled a History of the Dress of the British Soldier from the Earliest Period to the Present Time, which was published in 1833 and which he illustrated with lithographs after his own drawings. When a young man, John Dalbiac Luard had served as an officer in the 82nd Foot. In the mid-1850s he was a friend of John Everett Millais, whose son described how this ex-soldier was 'so devoted [...] to Art, that in 1853 he left the service and took up painting as a profession. Sharing with Millais a studio in Langham Chambers, which they occupied together for some years - in fact nearly down to the time of poor Luard's death in 1860 - he gave himself up to military subjects, of which "The Welcome Arrival" and "Nearing Home" were exhibited at the Royal Academy and subsequently engraved' (see Literature).

So endearing, I love these "Campaign" paintings and illustrations. I have some prints, not unlike this one, of the American Civil War, with soldiers, just milling about the camp, getting rady for battle. Interesting story of the painter as well, like so many that died unknown and poor.
Thank you
Marta

Thanks. I think it was the intimacy that appealed to me,the details of their billet. There are so many painters I still don't know.

How interesting - in the recent Quilt exhibition at the V&A there was a painting of a wounded Crimean soldier making a quilt from uniform material. It was very reminiscent of this painting and I wonder if it was the same artist.

Thank you Alice though I can't see anything like that - but quite possible of course, so many paintings never get recorded.