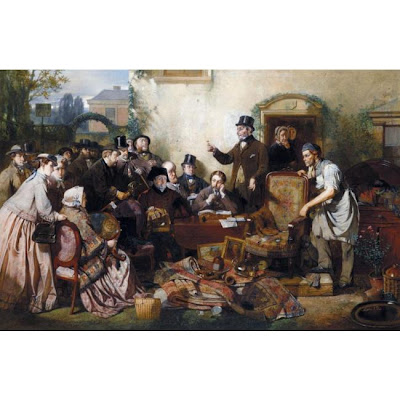 John Ritchie is best known for his panoramic outdoor subjects A Summer Day in Hyde Park (Museum of London), and A Winter Day in St James’s Park (private collection), both of which were first shown at the Liverpool Academy in 1858. These are scenes of modern life, and show a multiplicity of diverse social types, gathered together as a metaphor of the diversity and inter-relatedness of the elements of mid-Victorian society.

The present painting shows a country auction at which the furniture and household effects of a deceased officer are being sold. Piled in the foreground are carpets and rugs, with a pair of duelling pistols and a couple of framed pictures. The porter leans on an upholstered chair, which is apparently the lot being offered. The house which is being cleared is called Alma Cottage (the name being lettered on the wall that forms the backdrop to the composition). This may indicate that the late owner of the house had been a veteran of the Crimean War, and had served at Battle of Alma in September 1854.

Documentary information about Ritchie is limited. He first exhibited in Liverpool in 1849, sending a work entitled The Musical Cobbler from an address in Edinburgh. Whether or not he was Scottish by birth, he seems to have transferred to London by about 1853. His two remarkable London subjects of 1858 have already been referred to, but by the early 1860s, works were again sent to exhibitions in Liverpool from Edinburgh. Towards the end of his professional career, in the late 1860s and early ‘70s, he appears once again to have been based in the south. In addition to showing at the Liverpool Academy, Ritchie also exhibited at the Royal Academy, but with an intermission of five years from 1862.

Two versions of the present subject are recorded, superficially alike but with variations of detail. The alternative treatment, which is likewise signed and dated 1870 (Sotheby's, New York, 28 October 2003, lot 70).